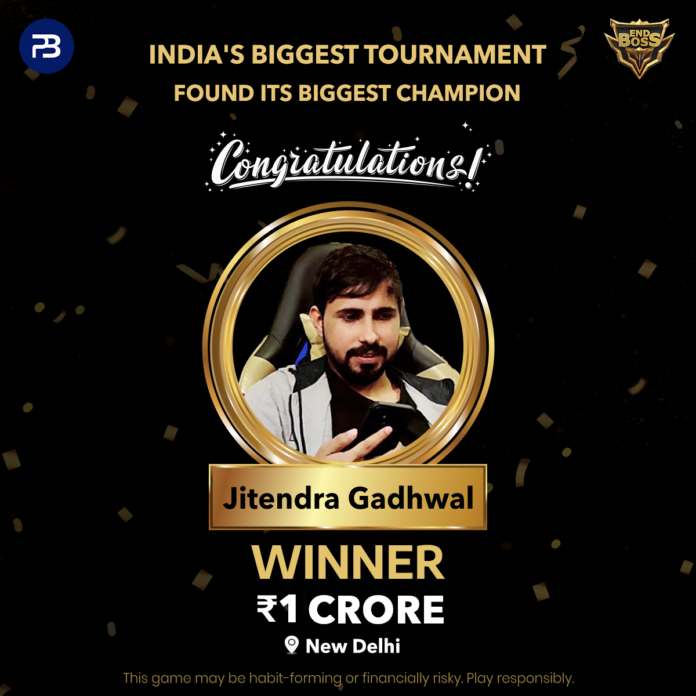 Delhi’s Jitendra Gadhwal, an IT professional, was crowned the winner amongst 4928 entries

New Delhi, May 25th, 2022: EndBoss, India’s largest standalone poker tournament, hosted by PokerBaazi.com, finished its 2022 edition with a massive prize pool of INR 5 crore. Jitendra Gadhwal, the 26-year-old B.Tech graduate from Delhi, was crowned the champion, taking home prize money of INR 1 crore. The tournament, which began on May 18th, attracted over 4928 entries from across the country.

“With every edition of Endboss, we are witnessing the growing popularity of the poker ecosystem in India”, commented Mr. Navkiran Singh, Founder & CEO of Baazi Games. He added “The growing participation in such tournaments and intense competition between the players to outwit each other with their skills, signal the trend that people are becoming more educated about the game. We, as a brand, envision making poker a mainstream sport, and such tournaments provide the perfect platform for players to feel encouraged and motivated towards pursuing poker further.”

Jitendra began playing poker as a hobby in 2016 and over a period it has turned into a passion for him. He learned about the EndBoss through an Instagram post from a friend and entered the tournament. Following his moment of glory, he intends to use the prize money to take a vacation and spend time with his family.

Commenting on his achievement, Jitendra Gadhwal, IT Professional said, “The landscape of poker is evolving right now, and it’s slowly becoming one of the most sought-after skill-based sports, forgoing the general perception of the game of luck, which is motivating more individuals to participate in such tournaments. To be a successful poker player, one must be patient and should consider all available options before making a particular decision on the table. Playing against skilled players from all around the country not only helped me test my skills but also showcased that I need to keep improving. I am elated with my achievement and now want to take my game to the next level in the upcoming tournaments.”

The finale of the tournament took place on May 22nd, 2022, while Jitendra grabbed the first place and the coveted title of EndBoss, 28-year-old Eshan Kapoor of Delhi came in second place and took home INR 60,20,000, followed by 37-year-old Bhushan Sohani of Pune who came in third place and pocketed INR 31,35,000. States that led the tournament included New Delhi, Maharashtra, Tamil Nadu, West Bengal, Goa, Uttar Pradesh, and Rajasthan who produced the top 10 winners for this edition.

Previous articleAmazfit GTS 2 New Version pops up, coming with a new colour option
Next articleSpurs to sign Fraser Forster as backup to Lloris as a free agent in June 2022