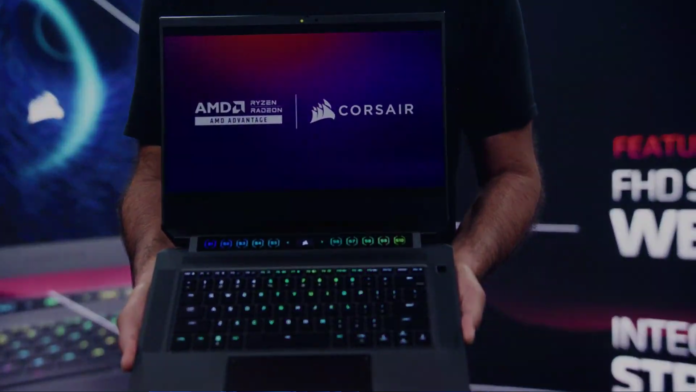 Corsair has entered the competitive world of gaming laptops, and its first machine appears to be unique. It features a touch bar-style row of buttons at the top that is accessible even when the laptop is closed, as well as Ryzen 6000-series CPUs and AMD Radeon RX 6000 series graphics.

From memory modules and SSDs to outstanding cases, Corsair is one of the most prominent manufacturers of PC gear. It had never delved into the gaming laptop market before, but everything changed with the new Corsair Voyager a1600 AMD Advantage Edition.

About the Corsair Gaming Laptop

Corsair worked with AMD and the AMD Advantage program to create the laptop, which means it’ll have “the latest Ryzen processors and Radeon graphics, enabled with the entire family of Smart technologies,” which means SmartAccess Storage will be available once Microsoft’s DirectStorage API is released.

Corsair claims that the innovative compact vapour chamber keeps temperatures down while providing a smaller profile than standard cooling arrangements. Two Thunderbolt 3 USB 4.0 ports, one USB 3.2 Gen 2 Type-C, one USB 3.2 Gen 1 Type-A, one SDXC 7.0 card reader, and an audio jack are included in the package.

Touch Bar and Other Features

The LCD bar at the top of the laptop is the most intriguing feature. “Ten easy-access customizable S-key shortcut buttons” are included. While it may resemble the now-defunct Touch Bar on MacBook Pros, Corsair emphasizes that their version does not replace the function row.

When the laptop is closed, the bar is also accessible, which might provide some helpful phone-like features such as the ability to monitor the battery life without opening it. Elgato Stream Deck software powers the S-keys, so the laptop appears to be geared toward mobile streamers. It’s the first laptop ever designed to be a fully mobile streaming solution, according to AMD’s Frank Azor.

Cherry MX Ultra-Low Profile key switches, per-key RGB backlighting, an inbuilt receiver that links to up to three Corsair slipstream wireless peripherals, a 1080p30 webcam with shutter and Camera Hub software, a 99Wh battery, and a huge trackpad are among the other features.

The laptop will be available in July, with Origin offering customizable variants. The pricing has yet to be determined. One website lists the Ryzen 7 6800HS at $2,699.99 and the Ryzen 9 6900HS at $2,999.99, but this information may not be accurate.

Read: Nvidia to release its Arm CPUs and Hopper GPUs in Q1 of 2023