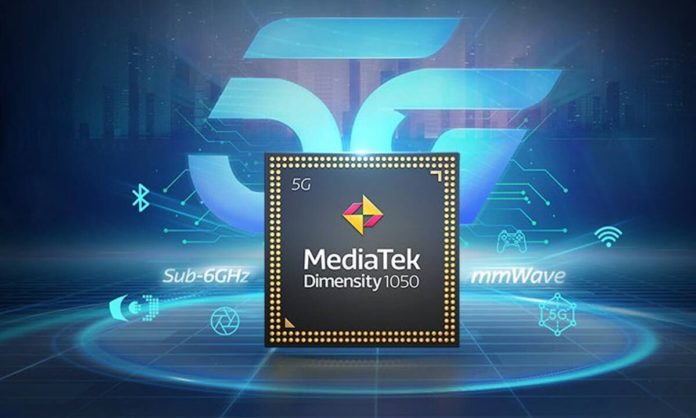 MediaTek has announced its new chipset under the Dimensity sections. The chipmaker has revealed its recent Dimensity 1050 chip all over the world. The new chip from the organization supports mmWave 5G along with the sub-6GHz 5G. It is an octa-core chip construct using TSMC’s 6nm processor.

How is Dimensity 1050 different from other 5G chips from MediaTek?

Dimensity 1050 is MediaTek’s first system-on-chip (SoC) to feature mmWave 5G support with the sub-6GHz 5G. Before this, all the MediaTek 5G SoCs featured the marginally slower Sub-6GHz 5G support only.
The company has also revealed that the chip will give auto-switching between mmWave and slower sub-6GHz 5G to give smooth connectivity.

mmWave is the advanced and fastest standard of 5G network which can offer speeds in gigabytes. Though, it is bounded in terms of broadcasting and reaches. Sub-6GHz is marginally slower compared to mmWave but has improved coverage. For that purpose, chipmakers generally implement both mmWave and Sub-6GHz on their chip to give interminable 5G connectivity.

It is built on the TSMC’s 6nm fabrication process. It is based on the Dimensity 1100 and brings enhancements in the connectivity department with the addition of mmWave and sub-6GHz 5G support. It says its ability to switch between network bands allows it to offer 53 percent faster speeds.