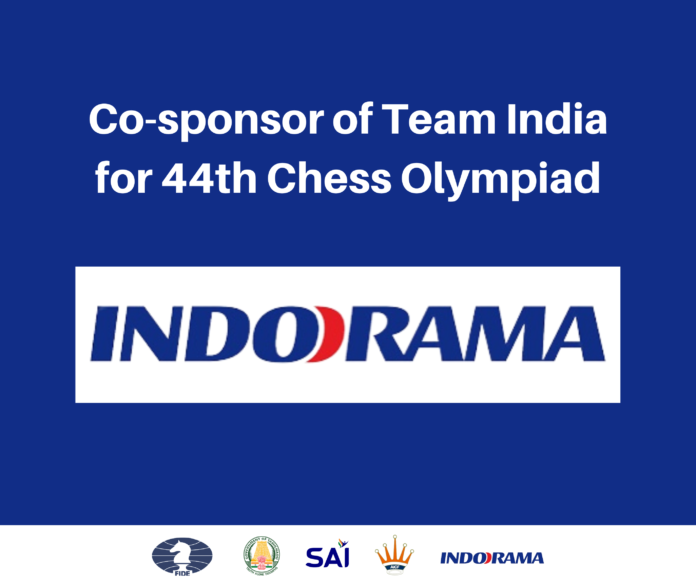 Chennai, May 24, 2022: All India Chess Federation (AICF) has joined hands with one of Asia’s leading chemical holding companies Indorama as co-sponsor of the Indian team for the upcoming 44th Chess Olympiad, scheduled in Chennai from July 28 to August 10.

This is also for the first time that the Indian team is striking it rich with the Tamil Nadu government providing a Rs 1 crore sponsorship for the squad while co-sponsors State Bank of India and Indorama, Asia’s leading chemical holding company have pledged Rs 50 lakhs each to the squad.

“We are delighted to welcome Indorama as the Indian team’s co-sponsor. Hosting the Chess Olympiad is a dream comes true moment for us and getting support from the sponsors will help us make it a memorable event. It’s great to see chess getting corporate support which will encourage and bolster the growth of the sport in India,” said AICF Secretary Bharat Singh Chauhan.

With social responsibility, service and safety being an integral part of its purpose, Singapore-based Indorama Corporation was established in 1975 and currently employs over 19,000 people across the world. The company intends to associate with Indian chess in various ways and contribute to the development of chess in the country.

“We have been supporting chess in the United Kingdom but we are Indians and want to support and promote chess in our home country. We, at Indorama, are super excited to be part of the journey of the Indian teams for the Chess Olympiad as co-sponsors. I am keen that young players benefit monetarily by playing chess as this is very essential to enhance the status of chess in India We believe this is a first step towards building a long and fruitful relationship,” said Aarti Lohia, spokesperson of Indorama.

Dr. Sanjay Kapoor, President of AICF announced that about 75 per cent of the sponsored amount will go to the players while the remaining will be utilized on conducting coaching camps and Kits for the players.

AICF announced a 20-member Indian squad to take part in the prestigious event, which is scheduled to take place in India for the first-time ever. India will field two teams each in the open and women’s sections. Recently, the players took part in the first coaching camp in Chennai under mentor Viswanathan Anand and coach Boris Gelfand.

Previous articleHere’s how Chelsea’s transfer plans for 2022 look right now
Next articlePremier League approves Todd Boehly as the new owner of Chelsea in a £4.25bn takeover