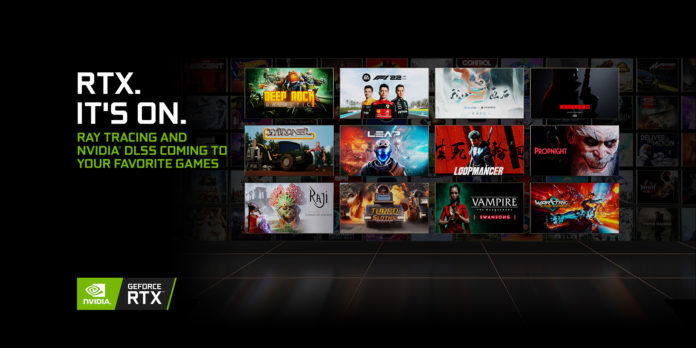 At the NVIDIA COMPUTEX 2022 keynote today, NVIDIA showcased how RTX momentum continues to build, with the cinematic look of ray tracing and performance-boosting AI defining the next generation of content.

Also, there are now over 250 RTX games and applications available, doubling since last year’s COMPUTEX, and GeForce gamers continue to upgrade, with over 30% now on RTX hardware, logging over 1 and a half billion hours of playtime with RTX ON!

Games are King at COMPUTEX

NVIDIA DLSS continues to set the standard for super-resolution with best in class performance and image quality, and is now integrated into more than 180 games and applications! At COMPUTEX, DLSS is in the games that gamers want to play, with 12 new games added to the ever-growing library.

The developers of the critically acclaimed HITMAN 3 announced they will be adding NVIDIA DLSS along with ray-traced opaque reflections and ray-traced shadows on May 24. With all options maxed out and ray tracing enabled, NVIDIA DLSS boosts HITMAN 3 frame rates by more than 2X at 4K.

GeForce gamers can also get the GeForce Game Ready Driver for HITMAN 3 tomorrow, May 24 at 6am PT, through the GeForce Experience application. The driver also provides the best experience in My Time At Sandrock and Sniper Elite 5.

NVIDIA is also driving the adoption of other advanced gaming technologies such as NVIDIA Reflex, which is now supported in 38 games, 22 displays, and 45 mice. With over 20M gamers playing with Reflex ON every month, Reflex has become one of NVIDIA’s most successful technologies.

Previous articleStrengthening its operations in India, Magenta aims to hire over 340+ employees in 2022
Next articleForspoken: The new Rumor pointing toward the Delay of the Game Again due to Final Fantasy XVI