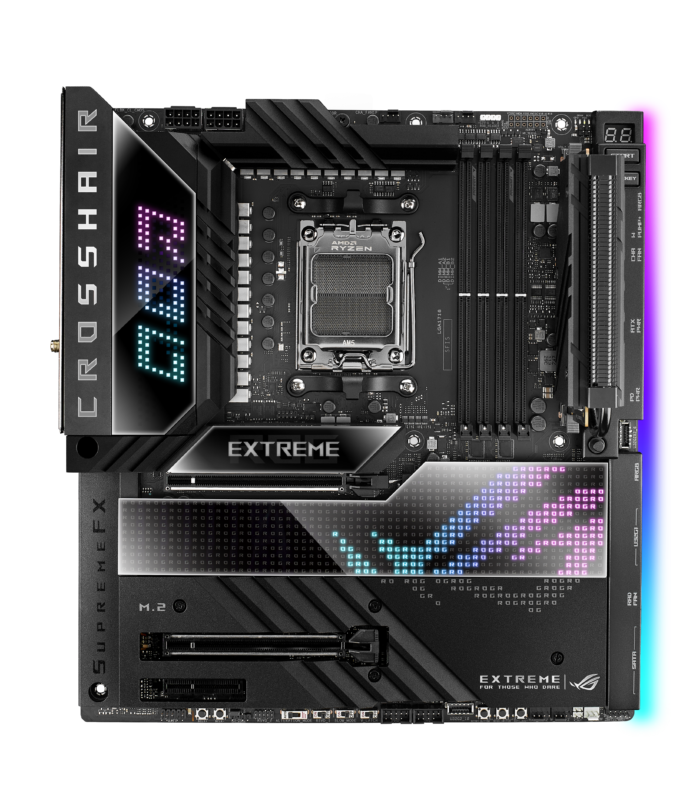 Mumbai, India, May 23, 2022 — ASUSRepublic of Gamers (ROG) today announced the ROG Crosshair X670E Extreme, a flagship motherboard for the long-anticipated AM5 platform from AMD.

Boasting next-gen PCIe® 5.0 connectivity, DDR5 RAM, and a massive power delivery subsystem that lays a solid foundation for overclocking, this next-gen board offers those who dare an unrivalled platform for their next build.

ASUS Q-Design features to simplify and streamline the build process, and a robust suite of tools empowers enthusiasts to maximize system performance. At a later date, ASUS will have more information to share about other upcoming AM5 motherboards from the ROG, ROG Strix, TUF Gaming, ProArt, and ASUS Prime families, but for now, one thing is certain: The ROG Crosshair X670E Extreme is destined to become one of the most coveted boards of this generation.

Next-gen memory, solid-state drives, and graphics cards all have one thing in common: the number five. DDR5 RAM is here, and components that leverage PCI Express 5.0 (PCIe) connectivity have landed or are looming on the horizon.

The ROG Crosshair X670E Extreme lets users reap the advantages of the massive bandwidth, sizzling new speeds, and exceptional power efficiency offered by next-generation DDR5 RAM. With data rates 50% faster than previous-generation DDR4 memory, DDR5 unleashes a new tier of performance, and this motherboard has a host of hardware and firmware optimizations that enable users to overclock capable memory kits to the limit.

PCIe 5.0 connectivity has already been rolled out across a selection of high-speed ports, and it will give users access to the fastest next-gen SSDs and GPUs as these hit the market. With double, the link speeds of PCIe 4.0, the new standard provides users with the bandwidth to deck out the ROG Crosshair X670E Extreme with USB4® and USB 3.2 Gen 2 ports. Since so many gamers use their PC’s front panel USB ports to recharge devices, the ROG Crosshair X670E Extreme offers a front panel USB 3.2 Gen 2 2×2 connector with support for Quick Charge 4+. By pairing this motherboard with a case featuring a front-panel USB Type-C® port, users can have convenient access to 60-watt charging.*

Two PCIe 5.0 x16 slots stand ready for the cutting-edge graphics cards of today and tomorrow. Between its two onboard slots and the three additional slots made available through the ROG PCIe 5.0 M.2 card and the ROG GEN-Z.2 card, the ROG Crosshair X670E Extreme offers a total of five M.2 slots―four of which support PCIe 5.0 x4 mode. Heatsinks for all the slots, including those on the add-in cards, ensure that users get the full performance of their drives without throttling. Six SATA 6 Gbps ports let users establish an even larger storage array, so they never have to ration their game library.

With its angular lines, vivid RGB LED accents and moody black tones, the ROG Crosshair X670E Extreme motherboard loves taking centre stage. For unmatched personalization options, this board features the AniMe Matrix™ display, an array of LEDs that can show off custom retro-style animations. Vibrant underglow lighting streams from the right edge of the board. An AURA RGB header and two addressable Gen 2 headers let users connect RGB LED strips for their case—and easily synchronize it all with their compatible Aura Sync gear.

Today’s processors take advantage of available power and thermal headroom to offer the best performance at any moment, so cooling isn’t just a matter of comfort—comprehensive cooling makes sure that users get the sustained performance that they demand. The ROG Crosshair X670E Extreme gives users a full suite of options for setting up their dream cooling solution. Six fan headers let users establish and control airflow in their build. If they are planning to deploy a custom liquid-cooling solution, they can connect up to two high-power pumps and also keep tabs on every aspect of their loop with a comprehensive collection of liquid-flow-monitoring headers and sensors.

Building and customizing a high-end gaming PC has never been so easy. The ROG Crosshair X670E Extreme features exclusive ASUS Q-Design innovations, including the PCIe Q-Release button. Today’s cutting-edge graphics cards often have beefy cooling solutions and sturdy backplates. That is great for performance—but they can get in the way of popping the PCIe release latch open. The PCIe Slot Q-Release button lets users release their graphics card from the slot with one press.

Similarly, traditional DIMM slot designs require users to lock in both sides of the memory stick, and it could be a challenge for users with larger fingers to unlock the latch closest to the graphics card. That is why ASUS has implemented a new single-sided Q-DIMM latching design. With this arrangement, users do not have to worry about a latch that may be close to their graphics card. A single latch on the easier-to-access side of the DIMM slot is all it takes to hold a memory stick firmly in place. Installing RAM with the ROG Crosshair X670E Extreme motherboard—and upgrading it down the road—is much easier due to these design features.

ASUS has even simplified the process of installing an M.2 drive. The M.2 Q-Latch gives users the peace of mind that they will never have to handle another tiny, easily lost M.2 screw ever again. Now, they can secure or loosen an M.2 drive with just their fingertips.

Even with all these features that simplify PC building, challenges can still arise during the build process. The ROG Crosshair X670E Extreme gives users peace of mind with features that make it easy to diagnose the situation. The ASUS Q-LED diagnostic array provides a quick and easy reference if a system encounters a critical error during its power-on self-test. Four LEDs on the motherboard, clearly marked for the CPU, RAM, graphics card, or boot device, will light up to tell users exactly which component has encountered an error.

Many gamers today just do not trust their wireless network to reliably lead them to victory. The 5.0 GHz and 2.4 GHz bands that most devices use to connect to the internet are only getting more congested with smartphones, laptops and smart home devices competing for signal, especially in locations like condos and apartments where multiple home networks might be overlapping. Thankfully, there is a solution in sight in select regions: Wi-Fi 6E.

This new standard takes advantage of the 6 GHz band, a slice of the spectrum only recently made available in specific countries. Connected to a Wi-Fi 6E router, the ROG Crosshair X670E Extreme will let users rise above the fray and enjoy the new frontier of wireless connections.

The onboard wired networking options have bragging rights of their own. An Intel 2.5 Gb Ethernet port provides a high-bandwidth hardline to a router, while a Marvell AQtion 10 Gb Ethernet port preps a machine to easily handle multi-terabyte file transfers on fast networks.

If visuals take the front seat when it comes to gaming, audio is riding shotgun. For immersive, pristine audio from a speaker system and headset, the audio chips and associated circuitry on ROG Crosshair X670E Extreme have been scrupulously designed for crystal-clear sound processing and output.

More AM5 motherboard options are on the way

With its overclocking-ready power delivery subsystem, exceptional cooling options, aggressive style and peerless connectivity, the ROG Crosshair X670E Extreme takes gaming performance to a new tier—and it is just the first of many. In the coming months, ASUS will be able to share the rest of the high-end ROG Crosshair lineup and motherboards from the other product families. Stay tuned for more information.

ROG Crosshair X670E will be available in India from authorized ASUS partners and major online stores later this year.

Previous articleBet on The Champions League Final with Bitcoin
Next articlePremier League 2021/22: Summary of the season