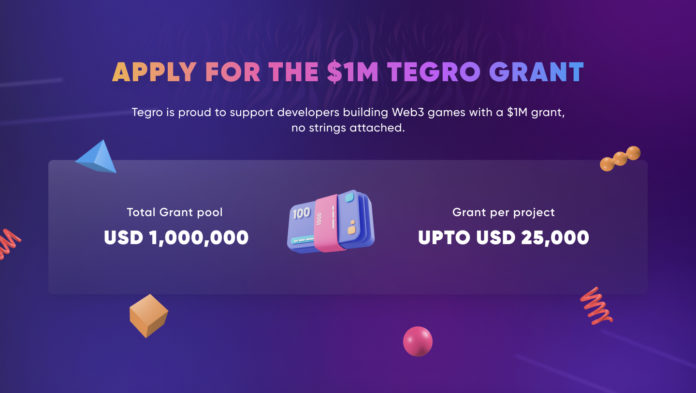 May 17, 2022 – Made-in-India web3 games marketplace Tegro has announced a $1 million grant for web3 game developers. Developers can apply for the grant to get up to $25,000 per project with no strings attached. Successful applicants will receive guidance on how to better craft their web3 games from a founding team with deep experience in making games and designing marketplaces with high liquidity.

“We are excited to invite developers to collaborate with us,” says Siddharth Menon, CEO and co-founder of Tegro. “Game development and publishing are in itself complex processes. Developers may not be completely conscientious of the slate of activities behind these words, let alone the complexities involved with building web3 games with economies that are sustainable and can stand the test of time.

Through the first Tegro grant we hope to bring users a new class of games worthy of actually being games, rather than a collection of poorly cobbled together websites and weak economies that eventually end up being rug pulls.”

Developers can apply for the $1 million grant at the official Tegro site right here.

Along with this, Tegro recently unveiled Tegronomics. This is a set of economic frameworks authored by the stalwarts in the space of crypto, gaming and economics that developers can leverage to build a sustainable and scalable economy in their games.

The economic framework proposes the use of Fungible tokens (FTs) as a core element of economy design based on the belief that game economies should be built on top of FTs as opposed to NFTs to increase both frequency of trading and liquidity, and also making it much easier to deploy large funds.

You can check out more details on Tegronomics and how it can improve web3 game development at the official Tegro website.

Tegro believes that web3 games are the next paradigm shift in gaming, similar to how mobile and free-to-play were. Tegro plans to unlock a $2 trillion market by building a sustainable web3 gaming ecosystem.