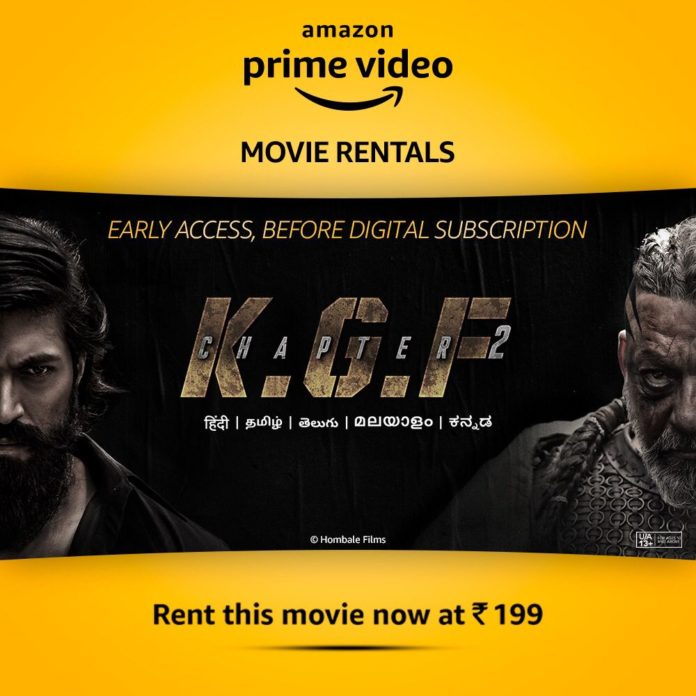 KGF Chapter 2 is now available for rent on Amazon Prime Video. The movie has come on Video-on-demand after one month from its release date. KGF Chapter 2 was released in theatres on the 14th of April 2022. It has collected almost Rs 53 crores net from Hindi alone, breaking all the records in the market. The movie has become unstoppable, it has collected Rs 1200 crores worldwide and has emerged as the fourth highest-grossing movie in the Indian film industry of all time after the Jr NTR and Ram Charan-led RRR, the Prabhas-fronted Baahubali 2: The Conclusion, and Aamir Khan’s sports drama Dangal.

Those who want to watch the movie, have to first rent it for Rs 199 and then it can be premiered on subscription-based streaming services i.e. on the OTT platform. It also has to keep in mind that the audiences have to buy it digitally by using a debit card or credit card.

After the renting process is over, once is ready to binge the movie KGF Chapter 2. It will provide a time span of 30 days to watch the movie, but if you once started watching the movie, then you have only 48 hours to finish the movie. The rented movie is not possible to be downloaded.

The fearless Rocking star Rocky Bhai wanted to control the globe and become so well-known that he himself become a brand later on after his struggle in his early life. In his quest for dominance, he traveled to the Kolar Gold Fields to assassinate Garuda and take control of the territory. And indeed, he was successful in his search and obtaining the KGF location with the assistance of slave laborers. The further story was continued in the movie’s second sequel. KGF Chapter 2 stars Yash, Sanjay Dutt, Srinidhi Shetty, Raveena Tandon, and Prakash Raj.