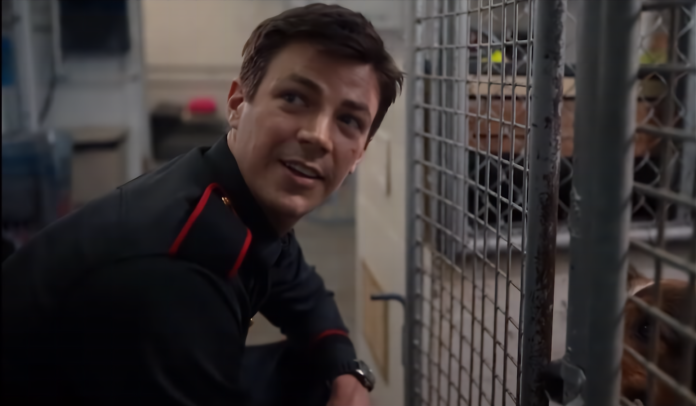 Netflix has dropped the trailer of the latest boy-meeting-dog movie, ‘Rescued by Ruby’. This film is featuring Grant Gustin whom we know for playing the role in DC Universe, The  Flash in the series. However, this film will take the viewer through an underdog story for both Grant Gustin’s character and also the leading pup, Ruby. If you are a pet lover then this film is definitely for you.

This film is based on a state trooper hoping to be reassigned to the K-9 Unit, Officer Dan and also is looking everywhere in search of a  chance. It is unfortunate for him as he overseeing officer who has not even believed that Dan is mentally prepared for a new position.

In this film, the voice-over explores what the head officer believes Dan lacks for the “calm and focus” it also takes to stand the leash of a K-9 team. Now the pushes have been reconsidered as Dan is hoping for a complete shutdown while he has been told that the force had not had the funds for that new dog.

After that he takes things into his own hands, Dan set to head on the local shelter in search of a  dog for adoption. He soon gets his match Ruby who is a pup as that has been coming back with seven times for her rowdy and energetic nature.

There is a  quick montage that has taken audiences through all of  Ruby’s struggles s containing her addiction to chewing, digging, and also her diversity to become housebroken. Foe Ruby, it seems very lucky as Dan becomes determined for taking her with him on the rise to the top.

After countless training and never-ending patience, Dan starts to teach Ruby how to be a  family dog like a law enforcement partner. It is expected that Ruby will teach fans many things as well.

This film features Grant Gustin, Tom McBeath, Brad Mann, Scott Wolf, Kaylah Zander, Camille Sullivan, and Sharon Taylor. It has been directed by Katt Shea. It has been written by  Karen Janszen. It is true that canine-based films always left us emotional. It is expected that this time there will be no change.

This Netflix canine film will release on 17th March 2022 Netflix. It seems that the fight for redemption by both Ruby and Dan makes the story look like self-discovery, strength, determination, and hope.