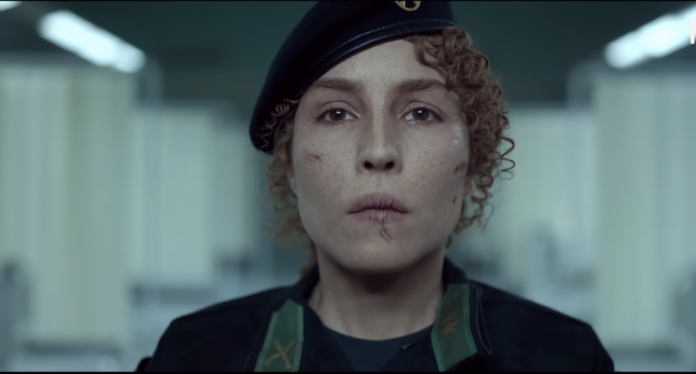 Netflix has dropped the official trailer of the Scandinavian thriller Black Crab. This film follows the true story from the novel of the same name by Jerker Virdborg. This film basically shows Caroline and a group of soldiers exploring a dangerous mission to transport such a strange mission for transporting the package in the frozen archipelago.

It shows Caroline Edh who is a speed skater become a soldier as she and her teammate battle for survival in the frozen archipelago along with their tactical team in the frozen archipelago and their tactical team must be navigated to bring it to an end of the war of the mission that are few and also very dangerous to grow now the main questions is who in the team is trusted one.

It also follows the six soldiers into the post-apocalyptic, war-torn world who may be traveling in the frozen wasteland and also become able to deliver such a strange peace that might bring about the ending of the war. It is not the end of the war as Caroline seeking. This mission also holds a  completely different significance for her. The main question that arises is how much they can go for their own survival.

This Netflix thriller movie is featuring  Nomi Rapace as lamb, Jakob Oftebro, Dar Salim, Ardalan Esmaili, and Erik Edge This film is directed by Adam Berg. The director said, ” I’m very happy and proud to have such a strong cast breathe life into this movie and our characters. These skills actors, their eyes, voices, faces, and bodies will carry us through the story. They will make us feel the brutality of war. They will make us feel the brutality of war, the importance of hope in a  hopeless world, and the hard price you have to pay for survival. They  will bring beautiful humanity  to the cold  harsh world that is the Black Crab.”

In this film, Berg is playing triple duty as he has also been cowered the script with Pelle Radstrom and it is one of the executive producers along with Christopher Granier-Deferred, and Rapace herself.

This Netflix film will release on 18th March 2022 on Netflix globally.