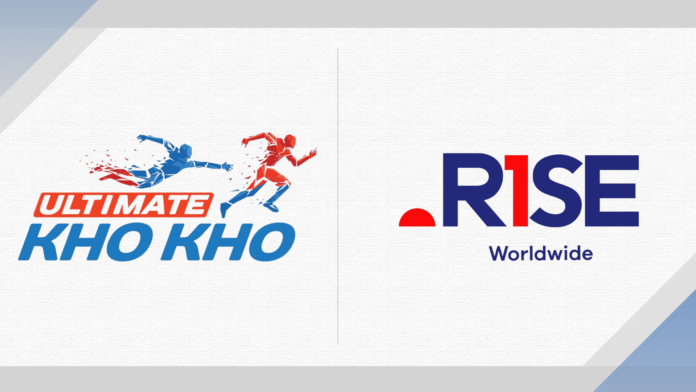 New Delhi, February 21, 2022: Ultimate Kho Kho has signed RISE Worldwide, India’s largest independent Sports, Lifestyle and Entertainment Company, as its exclusive Broadcast Production Partner and league consultant as it aims to re-brand and present one of India’s oldest sports as a next-gen and visually engaging entity.

As part of the 3-year agreement, RISE will work closely with Ultimate Kho-Kho to give the game a makeover and make it more viewer-friendly. It will help create standard operating procedures from the TV broadcast perspective in terms of presentation such as the look and feel of the game, duration of the game, grooming and training players and experts and sponsor integration.

The motive is to create a brand that builds on all elements within the league and helps develop the sports year on year with exclusive and well-researched enhancements. This partnership will leverage the extensive experience RISE has regarding building and sustaining leagues, to establish the brand Ultimate Kho-Kho in the sports landscape of India.

Talking about the association, Ultimate Kho Kho CEO Tenzing Niyogi said, “Our emphasis is to bring forth Kho-Kho’s new avatar and make it popular among the masses. We are delighted to welcome RISE Worldwide on board. The game changes within seconds in this sport. It prepares the players to respond swiftly and in a different way, making them as dynamic as the sport itself. And this partnership will put major emphasis on the versatility within the coverage and creativity in providing uniqueness to different segments in the broadcast. I am also confident that with the coming together of Ultimate Kho Kho and RISE Worldwide, Kho-Kho is ready to take over India and the globe.”

James Rego, Head of Broadcast, RISE Worldwide said, “We are excited to partner with Ultimate Kho Kho and take the game, which has been played in rural India for centuries, to the world stage. Viewers would get to see kho-kho in a stunning new avatar which will inspire youngsters and help grow the sport.”

“High on pace, high on strategy, the enhanced version of this game will make for an interesting, high-octane viewing experience through our world-class production expertise, leveraging our multi-sport brand experience, multilingual content to lend thrill and intrigue to a fast-paced sport, engaging the audience. We are committed to working closely with the team at Ultimate Kho Kho to make watching kho-kho a world-class experience.

RISE Worldwide aims to offer audiences a visual spectacle like no other for an indigenous sport. Kho Kho is high on speed and big on strategies, a perfect blend of frenetic motion and intricate tactics. These core elements will be packaged and covered with a multi-camera set-up along with a few industry firsts for an indoor sport.

Ultimate Kho Kho has already roped in Sony Pictures Networks India (SPNI) as its official broadcast partner and the league’s live-action will be available on SPNI’s sports channels as well as on its OTT platform SonyLIV in English, Hindi and multiple regional languages.

The inaugural edition of the league, which is slated to take off later this year, will script a new exciting chapter in the Indian sporting history, giving Kho-Kho a complete makeover.

Previous articleWhat Is ULIP? What Are Its Benefits And Returns?
Next articleICC T20I Rankings: Rohit Sharma becomes the second captain after MS Dhoni to take India to the World No. 1 spot in T20Is