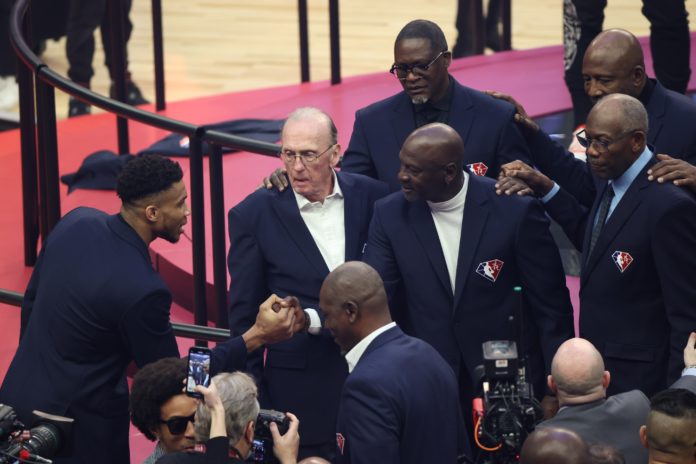 Curry was named the 2022 Kia NBA All-Star Game Kobe Bryant Most Valuable Player (MVP), making history for the most three-pointers made in an All-Star Game

“The first year you got to honor Kobe and his life and his legacy with this trophy.  All the thought that went into it.  I can’t spit it off the top I my head, but I know that everything on this trophy means something in terms of his life and what he represented, accomplishments on the court, and to have it be an All-Star MVP trophy and for it to be the first one, it definitely makes it special,” said Curry.

During a special moment at halftime, the NBA recognized the 75th Anniversary Team.

“Sitting next to Michael Jordan and stuff, that’s great and LeBron and Carmelo, John Stockton, Ray Allen.  Having the opportunity to sit next to Dirk, that kind of opened the path for us, that’s even more incredible feeling for me.  I watched him play when I was a kid when he was winning the championship for the Dallas Mavericks,” said Antetokounmpo.

“I aspire to be up there at some point when I’m done.  Even before I’m done.  Obviously, you have got to win.  Talent-wise, could be up there, but got to win a championship, so that’s the goal for me every single day, the work I put in to try to accomplish that,” said Embiid.