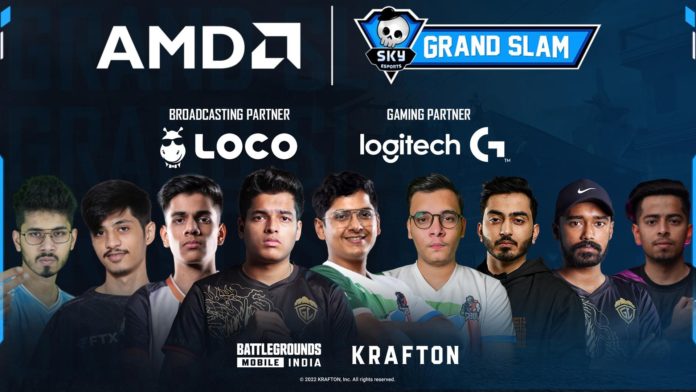 National, Feb 21, 2022: The grand finale for the first edition of the AMD Skyesports Grand Slam in 2022 featuring Battlegrounds Mobile India (BGMI) has set a new peak viewership record on India’s leading live game streaming and esports platform, Loco. With 16 of the best BGMI teams from across the country competing in one of Skyesports’ premium IPs, a record-breaking number of viewers tuned in to see who will be crowned the champions. The finals were played from February 9th to 16th.

Skyesports Grand Slam 2022 was presented by AMD with Loco as the broadcast partner for the tournament. The championship commenced on January 28th with 3000 teams, of which only 16 teams made it to the quarterfinals and finals. The 7-day finale concluded on 16th February, drawing attention from over 100K live viewers, consecutively for the last 5 days of the tournament on Loco.

On the final day of the Grand Slam, the tournament recorded a peak concurrent viewership of more than 159K which has set an all-new record on Loco. The number not only represents Skyesports’ ability to put up a captivating show for a huge audience but also shows the tremendous growth of Loco as a leading streaming platform in the country, garnering such high viewership numbers for the tournament. Prior to this, Loco’s Thug Invitational garnered a whopping 108K concurrent live viewers, marking the platforms first 100K benchmark, which was broken not long after by Skyesports’ BGMI Grandslam Tournament.

LOCO is an Indian esports and live game streaming platform where various Esports tournaments are streamed. Content creators across games like COD, GTA 5, Free Fire, Valorant, and more stream their gameplay regularly on the platform. The platform seamlessly connects streamers and creators to their relevant viewers, providing them with exponential content reach. With over 1,000 hours of live gaming content being streamed per day, Loco is dedicated to democratizing gaming entertainment in India and makes for the perfect esports broadcaster to partner with.

“Skyesports’ Grand Slam has become a mainstay of the Indian gaming calendar and we are thrilled that Loco continues to be the home for this property,” said Anirudh Pandita, Founder of Loco. “The audience interest and levels of engagement we saw for this IP on the platform, shattered all previous records. Skyesports and Loco are continuing to set new benchmarks for content partnerships, and consumers can expect high-quality entertainment from both of us through the course of the year.”

After an intense battle that went on to the last game, Team XO emerged as the champions of the Skyesports Grand Slam 2022 taking home a prize winner of 8 lakhs. The squad, consisting of IMMORTAL, Punkk, Fierce, SENSEI, and the recently-signed Snax, showed why they are a force to be reckoned with a consistent performance which saw them picking up the most placement points in the finals. Team Soul, which has been experimenting with different rosters in the past few months, seemed to have found their winning touch again with an impressive second-place finish, winning 3 lakhs. The BGIS champions, Skylightz Gaming, came in third, winning a prize pool of 1.5 lakhs.

“The engagement numbers from the audience is a testament to the production quality of Skyesports and the growing BGMI esports audience in the country,” said Shiva Nandy, the CEO of Skyesports. “We couldn’t be more thrilled to have broken records on India’s homegrown streaming platform, Loco, and look forward to continuing this partnership in the future. There’s a lot more coming throughout the year.”

“I’d like to congratulate our dynamic team at Jet Skyesports for achieving yet another successful milestone with this Grand Slam 2022 tournament,” said Rajan Navani, the Founder and CEO of JetSynthesys. “With the tournament viewership growing rapidly, we’re happy to see the engagement of Indian audiences scaling up towards these eminent gaming titles.”

The Skyesports Grand Slam 2022 will now shift its focus to VALORANT where another Rs. 15,00,000 will be up for grabs. Registrations for the PC shooter will kick off soon.

Skyesports is also excited to announce that the winners of the Grand Slam Season One, 2022  in BGMI and VALORANT will be felicitated at a private ceremony at the Taj Lands End, Mumbai towards the end of March. With some of the biggest stars in Indian esports and gaming attending, the ceremony will be an evening to remember. Skyesports will be bringing a lot of content for fans through the ceremony.