“Star Wars: The Old Republic”: The Cinematic trailer reveals Legacy of the Sith 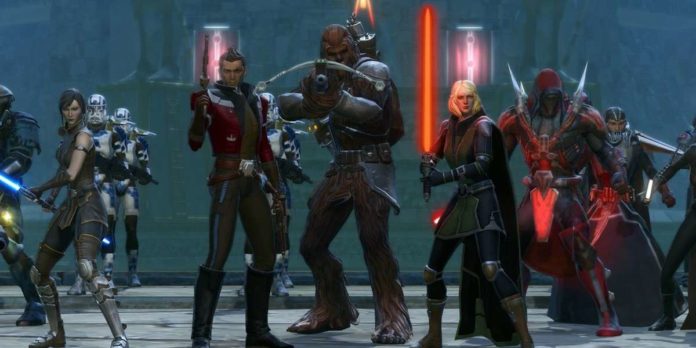 It is reported that the Old Republic dropped along with the three cinematic sets up along with Jedi and the Galactic Republic. It has been struggling just against the  Sith Empire, and also reveals several important characters. Later we will also get two more cinematic that is exploring the backstory of SWTOR’s Fallen Empire storyline. It seems that “disorder” is mainly following suit,  setting the stage for the drama of the latest expansion.

It seems that the new cinematic introduces Sa’har who is a Jedi Padwan and also about her master, Orr. It also starts to explore her backstory elaborately before jumping into the action along with a  confrontation with a Sith warrior who also seeks an ancient machine belonging to an unknown origin.

SWOTOR poster boy Darth Malgus also reveals to battle the Jedi and all when trying to turn Sa’har against her master by shedding the light of the real colors of the Jedi and Sith. It has been taken the seeds of doubt and emerges victorious se to leave the teen Sa’har questioning on everything as she ever knew.

It seems that the key art for The Old Republic: Legacy of the Sith starred with many characters. The characters are most recognizable and the characters had not been introduced in the subsequent previews also very reputed ones. It reveals a lightsaber-wielding twi’lek woman also had been infront and in the center of the art, and also while asked about her, SWOTOR  just replied simply that she had a new character who would play a pivotal role in the expansion pack.

It also reveals her appearance and the lightsaber color we can say that this strange and mysterious character is Sa’har. It contains her journey struggle, dynamic and Darth Malgus become important to Legacy of the Sith.

The trailer also centers on the consequences of power and also the impact of those who possess it reveals the complicated relationship of Padwan, Sa’har with her master Jedi Orr as while she was a child become separated he from her brother who had not have the right to The Force. After that, the two were confronted by Darth  Malgus on a mission, and he also unveils her secrets previously unknown to Sa’har that become a challenge in her relationship with her Jedi Master.

Now Sa’har will have to face her own past, her lost family, and her own conflict with the Jedi.

In the new trailer the creative director Charles Boys say, “ In the story of the game up to this point, Darth Malgus has returned to center stage in the last few years. He’s been revealed to have a separate plan of his own, independently from the rest of the Sith Empire. Certainly at odds v with the Jedi, as he’s  always been.”

He also continued, “ He’s kind of in pursuit of that plan. The players have been slowly unrevealing hat mystery in learning what it is he’s up to, and this trailer shows a big part of that, a big element in it, and sets up where it’s going to go in the future. Not just in the expansion itself, but beyond that, in the updaters to come.”