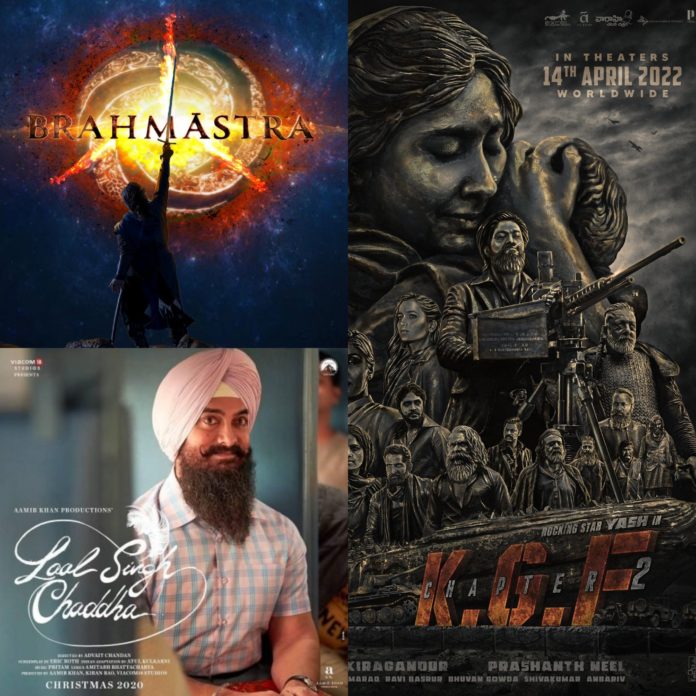 KGF Chapter 2 is a period action film. The film is directed and written by Prashanth Neel, he returns to helm the second part. It is produced by Vijay Kiragandur of Hombale Films. The Bollywood actor Sanjay Dutt will make his Sandalwood debut in KGF Chapter 2, where Dutt will portray the villain as Adheera. KGF 2 is going to release in multiple languages including Kannada, Telugu, Tamil, Malayalam, and Hindi. The movie also stars Srini.

Brahmastra is an upcoming superhero-fantasy-adventure film. It is written and directed by Ayan Mukherjee and produced by Karan Johar. The film stars Amitabh Bachchan, Ranbir Kapoor, Alia Bhatt, Mouni Roy, and Nagarjuna Akkineni. The film is intended to serve as the first film in a planned trilogy.

Laal Singh Chadda is an upcoming comedy-drama film. It is directed by Advait Chandan and written by Eric Roth and Atul Kulkarni. The film is produced by Aamir Khan Productions, Viacom18 Studios, and Paramount Pictures. The story of the film is based on Tom Hank’s film Forrest Gump. It stars Aamir Khan and Kareena Kapoor Khan.

Prithviraj is a historical action-drama film. It is directed by Chandraprakash Dwivedi and produced by Yash Raj Films. The story of the film is based on a historical drama based on the life of the warrior in every ounce grand. The film has been written and directed by Chandraprakash Dwivedi, who was remembered by everyone for helming and playing Chanakya in the iconic TV show of the 90s. The film is going to be released in theatres on 21st January 2022.

Heropanti 2 is an upcoming romantic-action film. The film is directed by Ahmed Khan and written by Rajat Arora and produced by Sajid Nadiadwala under the banner of Nadiadwala Grandson Entertainment. It stars Tiger Shroff, Nawazuddin Siddiqui, and Tara Sultania. It is going to be released on 29th April 2022.

Read- Formula One: Drive to Survive- Netflix’s new series has got its release date

Previous articleHarbhajan Singh, Inzamam-ul-Haq and Manisha Koirala come together to laud World Esports Cup winners from India, Pakistan and Nepal
Next article“Pieces of Her(Season 1)”: All the Latest Updates about Netflix Thriller Series and Release Date