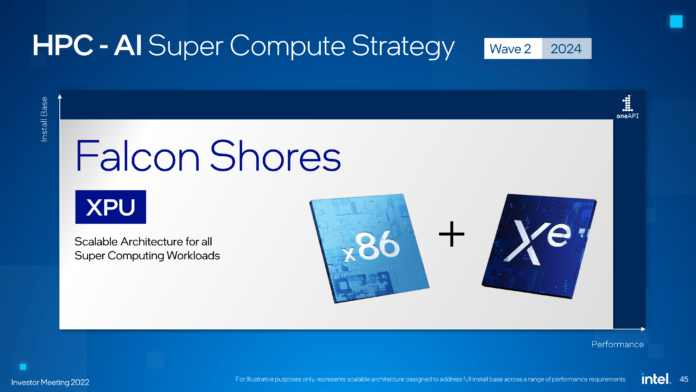 On Thursday, Intel introduced one of its following big supercomputing platforms: the Falcon Shores design, which will combine general-purpose x86 processor cores with highly parallel processing Xe-HPC GPU cores into a single socket, together with Intel-developed shared high-bandwidth memory. In 2024, the product is scheduled to be available.

The Falcon Shores is dubbed an XPU by Intel to underline that it contains CPUs and GPUs. Falcon Shores will make considerable use of Intel’s multi-chipset/modular processor design strategy and will have a variable ratio of x86 and Xe-HPC cores, depending on the target application. The CPU and GPU tiles are reported to be built using an ‘Angstrom Era Process,’ which could be Intel 20A or Intel 18A, and then coupled utilising Intel’s sophisticated packaging technologies, which will be the Falcon Shores’ significant enablers. The CPU and GPU will employ unified high-bandwidth memory to boost efficiency and substantially simplify compute GPU programming. Intel also alluded to a brand-new type of memory that it is developing but did not expand.

“Falcon Shores is built on top of an impressive array of technologies, including an angstrom era process technology, next-generation packaging, new extreme bandwidth shared memory being developed by Intel and industry-leading I/O,” said Koduri. “We have super excited about this architecture as it brings acceleration to a much broader range of workloads than the current discrete solutions.”

Modern supercomputers handle tasks that require excellent single-thread performance on general-purpose CPUs and highly parallel workloads on computing GPU accelerators. For the time being, this architecture has proven to be balanced in terms of performance, power, and cost. Still, tighter CPU and GPU resources integration will allow for even higher performance and make accelerated computing available to a broader range of workloads.

Falcon Shores will be a huge step forward for Intel in achieving its aim of creating ZettaFLOPS-class supercomputers by 2027. Intel says it will need new processing architectures (i.e., improvements to the x86 and Xe architectures), new process technologies and advanced packaging methods, faster memory and I/O interfaces (unified extreme bandwidth memory and advanced interconnections/packaging appear to address this), and new system architectures to increase supercomputer performance by 1000 times in five years. According to the business, Falcon Ridge brings together all of the pillars required for ZettaFLOPS-class supercomputers.

“Beginning with the technology foundation we have today, you need significant revolutionary gains in architecture, in power efficiency and thermal management, in-process and packaging technology and memory and IO capacity and bandwidth,” said Koduri. “We have our advanced technology teams already on their way with inventions to pave the path to Zetta-Scale.”

Previous articleISL 2021-22: The final will take place on March 20, with the two-legged semifinals starting on March 11
Next articleIt’s Official! Intel will be releasing its Desktop Arc GPUs Coming Q2, with Laptop getting the treatment in Q1