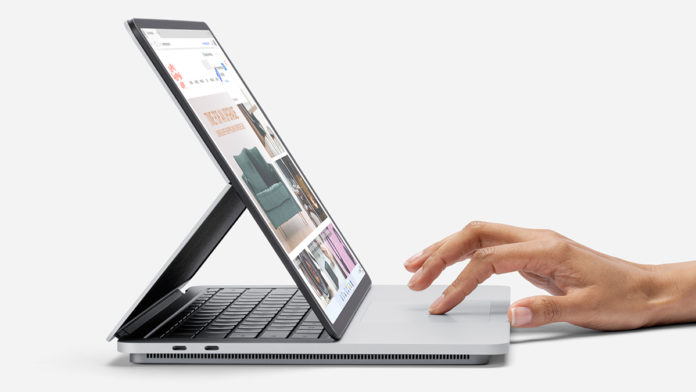 Last year, Microsoft announced its new detachable yet power-packed Surface Laptop Studio as an addition aimed towards creators who need more power without having to sacrifice mobility as well as the flexibility of the laptop. So, this Surface Laptop Studio was born with quite a heavy price tag but a successor to the Surface Book line of powerful laptops, it is a completely new chapter.

We know that Microsoft’s Surface series of laptops are premium and are costly as well and when they come to India they become even costlier, thanks to the tariffs. While it has a starting price tag of $1,599.99, keeping in line with it, in India, Microsoft has kept a starting price of Rs. 1,56,999 and will be available commercially from March 8th.

“Designed to light up the best of Windows 11, Surface Laptop Studio promises to help you stay in the flow, be inspired, and get closer to what you love with its incredibly powerful and infinitely flexible form factor,” Bhaskar Basu, Country Head Devices (Surface), Microsoft India said in a statement.

It presents a total redesign for Microsoft’s flagship laptop, and the company has decided to ditch the removable display in favour of one that pulls forward to transform from a laptop into a tablet, or to put it in Microsoft’s terms, Studio Mode. This new Surface Laptop Studio features a 14.4-inch PixelSense Flow display (2400 x 1600) that supports up to 120Hz and Dolby Vision.

The software giant is using a new flexible Dynamic Woven Hinge, and according to Microsoft the Hinge is durable and allows the laptop to transition between modes much like the larger Surface Studio. So, one can use this Microsoft device in three modes: laptop, stage, and studio.

In laptop mode, the display is arranged just like a regular laptop, with a full keyboard and a new touchpad with haptics. Coming to the stage mode, you can pull the display forward to an angle that’s designed for gaming, streaming, or presenting, now that’s something new.

The display in Stage mode will cover the keyboard, and the angle is also more suited toward watching Netflix or playing games, touching the display, or using the new Surface Slim Pen 2 for digital inking. This Surface Laptop Studio weighs nearly four pounds and is 0.7 inches thick, so it isn’t exactly a tablet but to have such horsepower in such a form factor makes a great option for productivity work.

The Surface Laptop Studio is powered by two processor variants which are Intel’s quad-core 11th Gen Core i5 and Core i7 processors, you can choose between any of the variants, of course, the cost will differ. The Core i5 models will ship with Intel Iris Xe graphics, while the Core i7 variants will include Nvidia’s RTX 3050 Ti GPU with 4GB of VRAM.

We also get options to choose between 16GB and 32GB of RAM, and up to 2TB of removable SSD storage. Other specs include two USB 4 ports with Thunderbolt 4, the usual Surface Connect charging port, and a 3.5mm headphone jack.

The laptop is already listed on Amazon India but with higher prices: https://amzn.to/3GUVY4g

Previous articleREVEALED: The Premier League team who struggles the most without their star player
Next articleHere’s the list of the highest paid athletes in the top 25 countries in 2022