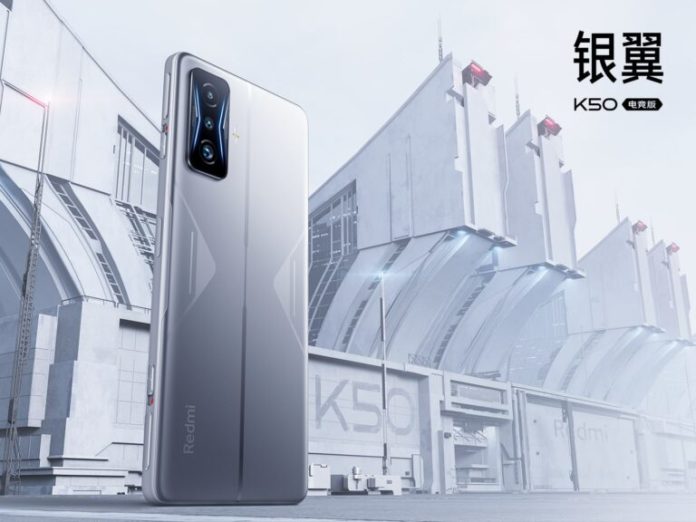 Redmi has launched its latest offering, the Redmi K50G or the Redmi K50 Gaming Edition as it is more popularly known at a launch event in China. The smartphone features the Snapdragon 8 Gen 1 chip and is equipped with multiple features that maximize its performance and enhance the overall gaming experience.

The Redmi K50G features a sports automobile-inspired design with a streamlined body with well-crafted details. The smartphone has an X on the rear which catches everyone’s attention. The X theme can also be seen on the camera module and the speaker grill as well. The camera frame has an LED strip that doubles up as a notification light.

The Redmi K50 Gaming Edition has two shoulder triggers on the right, pushing the power button positioning a little lower than traditional smartphones. On the left spine, you see the volume controls on a metallic frame, the rear has an AG glass finish on the back.

In terms of display, Redmi has provided a 6.67″ OLED FHD+ display with a refresh rate of 120Hz and a touch sampling rate of 480Hz. The display covers the DCI-P3 color gamut with support for HDR10+ and MEMC. There is a layer of Gorilla Glass Victus for better protection and the display also has a Display Mate A+ certification.

In terms of the optics, the Redmi K50 Gaming Edition has a triple camera setup on the rear with a 64MP primary Sony IMX686 sensor, an 8MP 120-degree ultrawide camera, and a 2MP telemacro lens.

The camera module also houses a flicker sensor that can detect the frequency of fluorescent lights and adjust shutter speed and ISO accordingly, so you get the best quality photos and videos. On the front, it has a 20MP Sony IMX596 sensor.

The Redmi K50 Gaming Edition has an amazing cooling setup. It offers dual second-generation stainless steel vapor chambers. These chambers transfer the heat absorbed from the processor, battery, and IC to its second-generation white graphene heat spreaders that are 20% more efficient in comparison to its predecessor.

To take it up a notch, users can purchase Redmi’s custom metal hear dissipation magnetic shell which hooks with a magnetic heat dissipation external fan to keep the temperature of your device low.

In terms of battery life, the Redmi K50 Gaming Edition has a 4,700mAh battery with support for 120W fast charging which can power the device from 0-100 in 17 minutes.

Redmi has focused more on delivering an immersive experience this time and to do so it is offering the world’s first CyberEngine ultra-wideband X-axis motor on the K50G, which is, at present, the largest X-axis vibration motor on an Android smartphone.

The sound system is also pretty amazing with one main speaker and one tweeter on both sides which adds up to four speakers in total.

The device has three Wi-Fi antennas, enhancing gaming. It offers improved anti-interference and low-latency optimization algorithms, it can effectively reduce game latency by 30% in comparison to traditional dual-WiFi antennas.

The back has two dark grey color racing stripes and it has the F1 flag pattern on the lower back.

The Redmi K50G is available in three color variants as Blue, Silver, and Black except for the special Mercedes-AMG-themed devices.

Official and confirmed: Eddie Nketiah renews contract with Arsenal till 2027; gets No 14 shirt