Top 10 most-streamed series in the last week in India 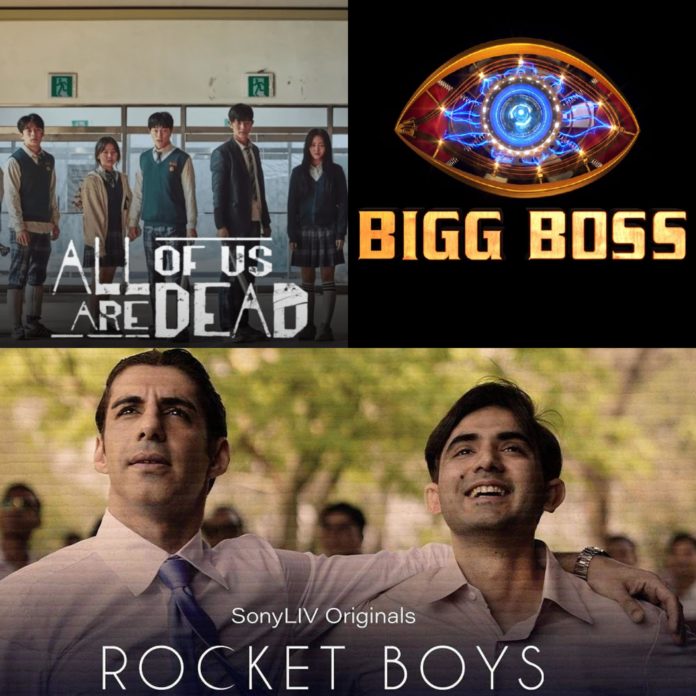 Here we have shortlisted the top 10 most-streamed series in the last week in India. There are a lot of options available now to watch, so people are getting confused about what to watch from the unlimited number of lists. Therefore we make a sorted list of the best series that was mostly watched by people in India, which will help the people not to miss the best one.

In this recent time, almost everything is becoming digital. This generation does not watch TV at all. Everyone is investing their time on the internet, social media, and digital platform. So, nowadays, many directors and producers are creating series which are released in the digital platform called OTT platform, which makes it easy to access any series or tv shows at any time and anywhere.

Here we present the list of the Top 10 most-watched series in the last week in India:-

Rocket Boys is an upcoming web series. It is created by Nikkhil Advani, the director of Mumbai Diaries 26/11, Hasmukh, and P.O.W. Bandi Yuddh Ke. The series Rocket Boys consists of eight episodes. The series is going to focus on the careers of Dr. Homi J. Bhabha and Dr. Vikram Sarabhai, who are basically the central figures in the creation of the Indian Space Programme. The series Rocket Boys casts Jim Sarbh and Ishwak Singh in the lead roles as Dr. Homi J. Bhabha and Dr. Vikram Sarabhai respectively in the lead roles.

Bigg Boss 15, also known as Bigg Boss: “Sankat in Jungle” or Bigg Boss: Pan Pana Pan Pandrah. It is the fifteenth season of the Indian reality TV series Bigg Boss. It premiered on 2 October 2021 on Colors TV. The show is hosted by Salman Khan for the twelfth time. The show shows us about the survival kit of all housemates with few essentials throughout the season and will get fewer facilities this time.

All of Us Are Dead is a South Korean coming-of-age zombie apocalypse horror streaming television series. The series is based on the Naverwebtoon, Now at Our School, written by Joo Dong-guen. It stars Park Ji-hoo, Yoon Chan-young, Cho Yi-hyun, Park Solomon, Yoo In-soo, Lee Yoo-mi, Kim Byung-chul, Lee Kyu-hyung, and Jeon Bae-soo.

Pam & Tommy is an American biographical drama miniseries. It is created for Hulu by Robert Siegel and is produced by Point Grey Pictures, Annapurna Television, and Lionsgate Television. It is a series that shows chronicles the marriage between actress Pamela Anderson and Mötley Crüe drummer Tommy Lee, played by Lily James and Sebastian Stan respectively. The series is based on the 2014 Rolling Stone article “Pam and Tommy: The Untold Story of the World’s Most Infamous Sex Tape” by Amanda Chicago Lewis.

5. The Book of Boba Fett

The Book of Boba Fett is an American space Western television series. It is created by Jon Favreau for the streaming service Disney+. It is part of the Star Wars franchise, taking place after the events of Return of the Jedi (1983). This series is a spin-off from the series The Mandalorian that features the crime lord and bounty hunter Boba Fett from that series and other Star Wars media. The Book of Boba Fett exists alongside The Mandalorian and its other spin-off Ahsoka.

Naruto: Shippuden is an anime series mainly adapted from Part II of Masashi Kishimoto’s original manga series, with exactly 500 episodes. It is set two and a half years after the original series in the Naruto universe, following the ninja teenager Naruto Uzumaki and his allies. The series is directed by Hayato Date and produced by Pierrot and TV Tokyo. It began broadcasting on 15th February 2007, on TV Tokyo and concluded on 23rd March 2017.

Games of Thrones is an American fantasy drama TV series. It is created by David Benioff and D.B. Weiss. The series is based on a fantasy novel named ‘A Song of Ice and Fire’ by George R.R. Martin. It is produced by Mark Huffam, Joanna Burn, Frank Doelger, Chris Newman, Greg Spence, Lisa McAtackney, Bryan Cogman, and Duncan Muggoch. Its production companies are HBO Entertainment, Television 360, Grok! Television, Generator Entertainment, Startling Television, and Bighead Littlehead. It contains 8 seasons with 73 episodes. The eighth season was released on 14th April 2019.

Snowdrop is a South Korean television series, it stars Jung Hae-in, Jisoo, Yoo In-na, Jang Seung-jo, Yoon Se-ah, Kim Hye-yoon, and Jung Yoo-jin. The series was released on JTBC from December 18, 2021, to January 30, 2022, every Saturday and Sunday at 22:30 (KST) for 16 episodes. The show is also available for streaming on Disney+ in the US and under the Star hub in selected International regions.

Demon Slayer: Kimetsu no Yaiba is a Japanese manga series written and illustrated by Koyoharu Gotouge. It follows teenage Tanjiro Kamado, who strives to become a demon slayer after his family was slaughtered and his younger sister Nezuko turned into a demon.

Shark Tank India is an Indian business reality television series that airs on SET India. The show is the Indian franchise of the American show Shark Tank. It shows us entrepreneurs making business presentations to a panel of five investors or sharks, who decide whether to invest in their company. The show received 62,000 aspirants from India, out of which 198 businesses were selected to pitch their ideas to the “sharks”.

Previous articleTop 5 football clubs with the most Ligue 1 titles of all time
Next articleSpider-Man: No Way Home got 6th Position in the list of Highest Grossing Movie of All Time with $1.8 Billion