Top 10 most-streamed movies in the last week in India 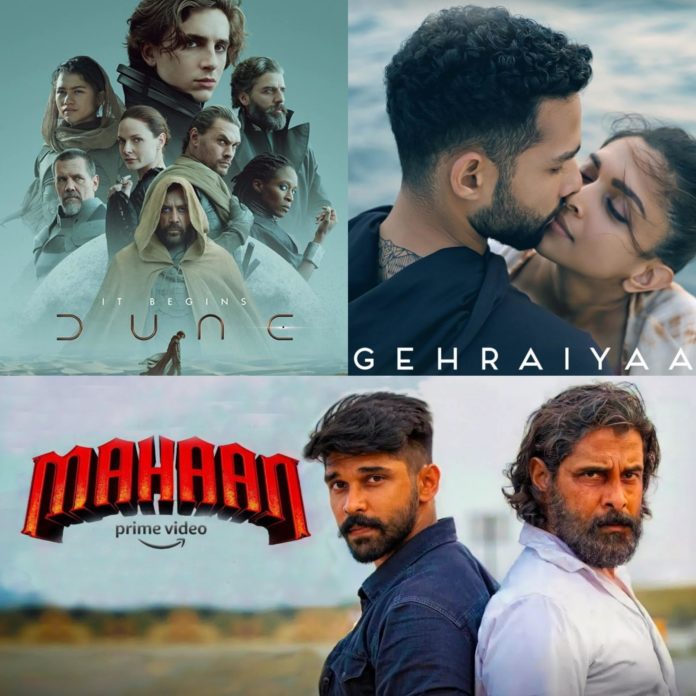 Dune, the American science-fiction movie has topped the list of Top 10 most-watched movies in the last week in India. Here we are presenting the top 10 streaming movies in the last week in India. In this recent time, almost everything is becoming digital. This generation does not watch TV at all, and everyone is investing their time on the internet, social media, and digital platform. So, nowadays, many directors and producers are creating movies that are released in the digital platform called OTT platform, which makes it easy to access any series or tv shows at any time and anywhere.

There are many options available now to watch, so people are getting confused about protecting from the unlimited number of lists. Therefore, we made a sorted list of movies watched mainly by people in India last week, which will help the people not miss the best one.

Here we present the list of Top 10 movies that were most watched in the last week in India:-

Dune is a 2021 American epic science fiction movie. It is directed by Denis Villeneuve and written by Jon Spaihts and Eric Roth. This film is an adaptation of the 1965 novel written by Frank Herbert, primarily covering the first half of the book. The film is set in the far future which follows Paul Atreides as his family, the noble House Atreides is thrust into a war for the deadly and inhospitable desert planet Arrakis. The movie stars Timothee Chalamet, Rebecca Ferguson, Oscar Isaac, Josh Brolin, Stellan Skarsgard, Dave Bautista, Stephen McKinley Henderson, Zendaya, David Dastmalchian, Chang Chen, Sharon Duncan-Brewster, Charlotte Rampling, Jason Momoa, and Javier Bardem.

Mahaan is a 2022 Indian Tamil-language action thriller movie. It is written and directed by Karthik Subbaraj and produced by S. S. Lalit Kumar under the banner of Seven Screen Studio. The movie stars Vikram, Dhruv Vikram, Simran, and Bobby Simha while Sananth, Vettai Muthukumar, Deepak Paramesh, and Aadukalam Naren are in supporting roles. The movie was released on 10th February 2022 on Amazon Prime Video.

Gehraiyaan is a 2022  romantic drama movie. It is directed by Shakun Batra who also wrote the script with Ayesha Devitre, Sumit Roy, and Yash Sahai. The movie is jointly produced by Dharma Productions, Viacom18 Studios, and Jouska Films. The movie stars Deepika Padukone, Siddhant Chaturvedi, Ananya Panday, Dhairya Karwa with Naseeruddin Shah, and Rajat Kapoor in supporting roles. The movie Gehraiyaan was released on 11th February 2022 on Amazon Prime Video.

The Power of the Dog is a 2021 Western psychological drama movie. It is written and directed by Jane Campion. The movie is based on Thomas Savage’s 1967 novel of the same name. The movie stars Benedict Cumberbatch, Kirsten Dunst, Jesse Plemons, and Kodi Smit-McPhee. The movie shows us the theme of love, grief, resentment, jealousy, and sexuality.

Looop Lapeta is a 2022 Indian comedy-thriller movie. It is directed by Aakash Bhatia and jointly produced by Sony Pictures Films India, Ellipsis Entertainment, and Aayush Maheshwari. The story of the movie shows us how Taapsee Pannu saves her boyfriend when he loses a mobster’s cash, she runs against the clock to save the day, if only she can break out of a curious cycle of dead ends. The movie stars Taapsee Pannu and Tahir Raj Bhasin in the lead roles as Savina Borkar aka Savi and as Satyajeet aka Satya respectively.

6. Venom: Let There Be Carnage

Venom is a 2018 American superhero movie. It is directed by Ruben Fleischer. The story is based on a Marvel Comics character named Venom. The story was written by Jeff Pinkner and Scott Rosenberg. It is produced by Avi Arad, Matt Tolmach, and Amy Pascal.

7. The Tragedy of Macbeth

The Tragedy of Macbeth is a 2021 American historical thriller film. It is written and directed by Joel Coen. The movie is based on the play Macbeth written by William Shakespeare. It is the first film directed by one of the Coen brothers without the other’s involvement. The film stars Denzel Washington, Frances McDormand (who also produced the film), Bertie Carvel, Alex Hassell, Corey Hawkins, Harry Melling, Kathryn Hunter, and Brendan Gleeson.

Ghostbusters: Afterlife is a 2021 American supernatural comedy movie. It is directed by Jason Reitman, written by Reitman and Gil Kenan. This movie is a sequel to Ghostbusters (1984) and Ghostbusters II (1989), and the fourth film in the Ghostbusters franchise. It is Set 32 years after the events of Ghostbusters II, it follows a single mother and her children who move to an Oklahoma farm they inherited from her estranged father. The film stars Carrie Coon, Finn Wolfhard, Mckenna Grace, Bokeem Woodbine, Paul Rudd, Logan Kim, and Celeste O’Connor. Bill Murray, Dan Aykroyd, Ernie Hudson, Annie Potts, and Sigourney Weaver appear in supporting roles, reprising their characters from the earlier films.

CODA is a 2021 coming-of-age comedy-drama movie. It is written and directed by Sian Heder. The film stars Emilia Jones as the eponymous CODA (child of deaf adults), the only hearing member of a deaf family. It also stars Eugenio Derbez, Troy Kotsur, Ferdia Walsh-Peelo, Daniel Durant, and Marlee Matlin feature in supporting roles. The plot of the movie shows us in Gloucester, Massachusetts, Ruby Rossi is the only hearing member of her family; her parents Frank and Jackie, and older brother Leo are all culturally Deaf. She assists with the family fishing business and plans to join it full-time after finishing high school.

Pushpa: The Rise- Part 1 is the action thriller movie of Allu Arjun. It is directed by Sukumar. The Mythri Movie Makers.Srivalli. The movie is based on the lives of red sandalwood smugglers in the Seshachalam Hills of the Rayalaseema region of Andhra Pradesh. The film was released in multiple languages. The movie stars Allu Arjun, Rashmika Mandanna, Fahadh Faasil, Dhanunjay, Rao Ramesh, and Ajay Ghosh. Samantha Ruth will be seen in a special appearance in an item song.

Previous articleLost Ark Crossed 1.3 Million Concurrents and become Steam’s Second Biggest Game
Next articleGoogle made a smart lamp but its not for you