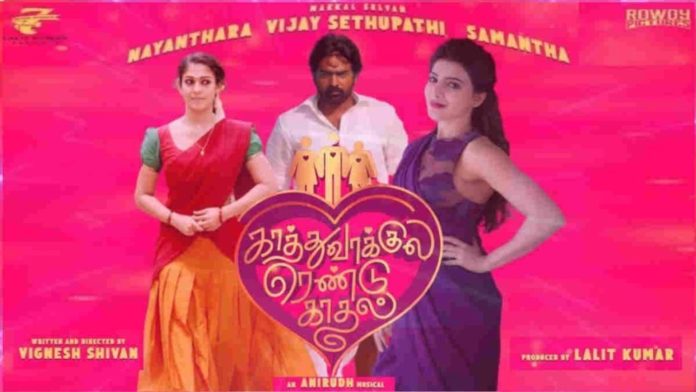 In this film, we will see Vijay Sethupathi as Rambo who will convince both his two lady love Kanmani and Khatija. Now they become a  settlement with a three-way relationship. The trio makes a  love triangle but this time it is a little different as the two ladies are convinced to get into the relationship of the love triangle. It seems to be awesome.

The teaser opens with tears of Vijay Sethupathi who is expressing that the time the two gorgeous ladies express their love to him his life becomes beautiful. After that, it rivals  Samantha in a stunning look at a  party with Vijay. They ride on a bike late at night and she falls in love. Now the trailer continues that Vijay becomes confused to choose the one by looking in the eye for the first while talking to them.

The actress Nayanthara is looking fabulous in a yellow saree and introduces herself to  Vijay Sethupathi by telling her name. Vijay funnily says that she belongs to the family of the  Bengali cricketer Saurav Ganguly’s family. Vijay Sethupathi is again confused about which his negative life turned into a positive.

It seems that his sad state of him is indicating to stay the two ladies in his life. Vijay Sethupathi spent a good romantic and funny time with his two lovers. After Vijay convinces the two ladies the love triangle starts as they start to explore jointly. Now he comes to the point that he has to choose one between two and he is praying to God to save him from this confusion.

This new film has made as mark the maiden collaboration of Vijay Sethupathi and Samantha as the pair. They also the part of the critically acclaimed Tamil film Super Deluxe and they had not have any such scenes together. This film also markings the reunion of Vignesh, Vijay Sethupathi, and Nayanthara after the last outing of Naanum Rowdydhaan.

The music of the film has been composed by Anirudh Ravichander. It will be the fourth outing of Vignesh as director. Earlier he has directed Netflix  India’s latest Tamil anthology Paava Kadhaigal. This short of Vignesh just features  Anjali and Kalki Koechlin in the pivotal role.

It has been confirmed that the film will appear on the big screens globally on 28th April 2022. The release date of the film also was postponed due to the novel coronavirus pandemic situation.

Here is the teaser

Saani Kaayidham: Keerthy Suresh becomes a murderer to take the revenge for the injustice

“Etharkkum Thunindhavan”: The teaser of Surya’s Tamil action-drama film has been revealed