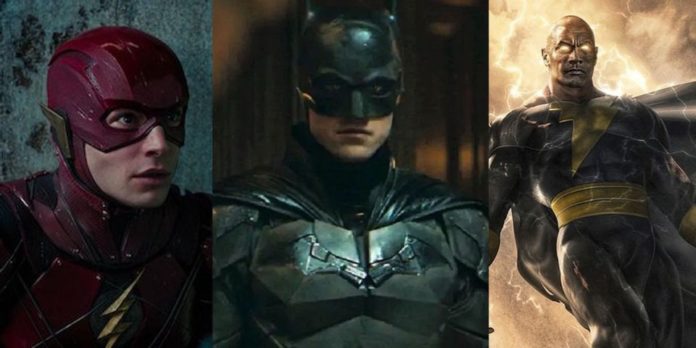 DC is also a popular superhero franchise and a good competitor of Marvel. After the blockbuster hit of Spider-Man: No Way Home, it seems that the marvel side become heavy, DC Comics and Warner Bros looking to stand toe to toe with the rival this year.

This year DC also has a huge collection of movies and series to reveal for the fans. DC already declared about the returning of the DC superheroes The Batman, Black Adam, DC League of Super-Pets, The Flash, and Aquaman and the Lost Kingdom.

Here is a list of all the upcoming DC Shows:

This is one of the most anticipated releases for 2022. In this Matt Reeve’s The Batman film we will see Robert Pattinson in the pivotal role. It gives a look of Paul Dano’s Riddler in the civilian clothes and saying to Alex Fern’s Commissioner Savage based on the latest line of the dialogue by Riddler telling,” I’m here to unmask the truth about this city”, and it has just set the stage of the deep corruption in the justice system of Gotham.

The corruption theme for Batman in his early career stories just like returning of “Blind eye” that we have been heard in the countless marketing materials. It just has taken us into the next shot having that exact sequence from where a car has been driven into the building to take apparently out Bruce Wayne. The trailer reveals Bruce looking up after the car rams along and he has seen such a strange and mysterious figure on the high balcony covered in darkness with such intense lightening. It is indicating that Riddler has been exposing his dominance over the city and that is the so-called power.

It is an upcoming DC super-pet film. This film is based on Krypto the Super-dog and Superman who are close friends and share that exact superpower and battling with the crime side by side in Metropolis. It seems that Krypto has to master his own powers for rescuing the mission while Superman becomes kidnapped.

It seems that the main story has been focused on how he become that DC legend. The latest project has bee also will mark like the official DCEU introduction for such Justice Society of America. It will be amazing as the  Black Adam, the Golden Age Heroes set to serve as the rivals with the anti-hero. The origin story of Johnson’s character passing through many pain just before getting the superpowers.

4. Aquaman and the Lost Kingdom

It is mainly the second Aquaman film. We have seen the first footage of the film on 16th December. It reveals that Mamoa’s superhero is also overlooking a valley and also sitting on the throne. The plot of the film is still kept under wrap. We also see some footage of such cool entry of  The Aquaman from the depth of the sea. In this second fill, we will see Jason Mamoa, Amber Head along with  Patrick Wilson, Yahya Abdul-Mateen II, Dolph Lundgren, Nicole Kidman, Randal Park, and more.

The CW has revealed the official new season of the fastest man alive on the earth. This series has been kicked off in a big way along with the latest Armageddon 5 part event along with Barry Allen who will be going to collaborate with heroes in Arrowbase. It also reveals such characters like Black Lightning, Sentinel, the Atom, Batwoman, and also the new  Green Arrow. It will be an amazing stretch of the show.

It is an animated FC show. There are three super girls named Diana, Kara, and Barbera whom the world knows as the DC Super Hero Girls. They have more to deal with than just beyond protecting Metropolis. As a teen, it is very tough to handle school, friends, family, and also the chaos.

The third season reveals that the gang is also going up against the Sisterhood of dad along with Doctor Who features Michelle Gomez. It seems that the superpower misfits face the struggle along with their own traumas and identity crisis and sometimes ended by protecting the World. It seems that in this new season they will overcome the struggles in their lives.

This animated show has surprisingly got such mature and adult content. At the ending of season 2, it just felt like it might have been an end of lovers Harley Queen and Poison Ivy speeding away from Jim Gordon and also the Gotham PD. In this third season, we will see  Kaley Cuoco as the antihero Harley Quinn, lake Bell as Poison Ivy, Alan Tudyk as Ron Funches, J.B. Smoove as Frank, Jason Alexander as Sy Borgman, and Christopher Meloni as Commissioner James Gordon.

It is an action-adventure DC series created by Bob Kane and Will Finger. This new series is following such young Alfred Pennyworth and later become Bruce Wayne’s legendary butler. There is also such a former British SAS soldier. It seems that Alfie is also known with his friends.  It start after the five-year time jump and a cultural revolution also has been changed the world for better or worse.

It is also one of the most anticipated shows of DC. It seems that the second season of the series was premiered last summer. Now the third will be premiered in 2022. The second season ended with the battle of Justice Society of America with Eclipso for the planet. It is true that they defeated all the villains and that does not they return to normal life. There will be a new opponent on the way for Courtney Whitmore as introduced with mysterious Mr. Bones. This new season will contain mainly 13 or more than 13 episodes.

It is a popular DC superhero animated show based on roommates Robin, Cyborg, Starfire, Raven, and Beast Boy love to protect the day. Season 7 also reveals their battle against crime.

It is based on a team of such teen superheroes battling against evil and also other perils.

It is a popular animated show. It is about such teenage superheroes who have been strived to prove themselves s  for the members of the Justice League.

Previous article“The Lord of the Rings”: Netflix Should Take the Rights or Not?
Next articleOnwardMobility pulls the plug on the 5G BlackBerry project after losing its naming rights