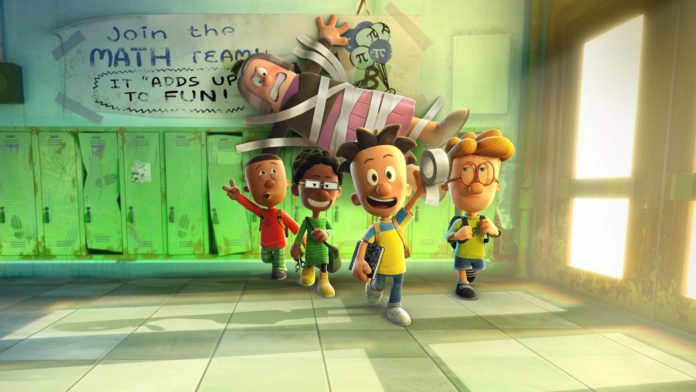 Paramount+ currently revealed the trailer of the ‘Big Nate’ that is an upcoming animated series and getting inspired by the child book franchise with the same name acclaimed by such author and cartoonist Lincoln Peirce. Apart from revealing the trailer  Paramount+ also has been assured about the exceptional guest star for the series premiere like Jack Black getting ready for rocking the school of Nate.

The trailer also reveals to Nate who is an eleven-year-old boy who uses his creative mind for dealing with his own insecurities and also the challenges of middle school. Nate is not alone in his adventures as he has been joined by a crazy group of friends that has been constantly and turn the school upside down. The trailer also shows the style of art of the animated series that blends 3D models for the main characters and 2D effects for bringing the franchise of Nate to life.

It has also been revealed by Paramount+ that the latest update about the series is the first  episode titled ” The Legend of the Gunting.” In this episode, Nate is trying to evade another detention when some of the new children pressure him to come back to his habits of the prankster. In this episode, Jack black the guest features Brad Gunter, Nate’s prankster inspiration when  Daniel Jacobs gives his voice to Bently carter, who is the new kid and also very eager to wreak such havoc along with the school on the side of Nate.

It seems that Big Nate is mainly based on the bestselling kid’s books and also such comic series that has been written and drawn by Peirce. Peirce just kick-started the Big Nate universe in 1991 as the daily comic strip. Now there are three decades later and the entire world already counts with 41 print collections and novel books with six activity books. Together the Big Nate books have been spent over more than 150 weeks on the New York Times in the list of Best Seller that will provide an excellent metric to measure the millions of people’s love to Peirce’s stories.

The first season actually revealed a different new story and fulfill the wish of the fans. There are the 26 episodes that have been dedicated to the adventures of Nate  with his friends  and the series also will have something new for the fans  of the franchise when also has been introducing such a humorous cast of the characters of the newcomers

It is reported that the first eight episodes of Big Nate exclusively hit on  17th February 2022  on Paramount+.

Dungeons & Dragons: Honor Among Thieves: Everything We Need to Know about the Dragon Series

Wolf Pack: Paramount+ has explored Werewolf Universe as Crawling as the horizon

All Upcoming Movies on Paramount+ in January 2023