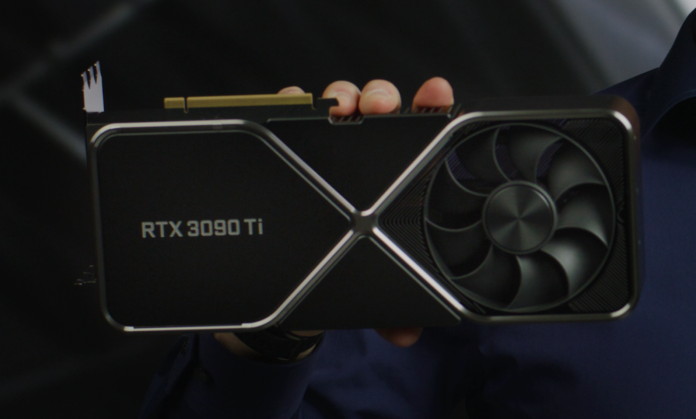 It appears that NVIDIA has requested their board partners to halt production of their impending GeForce RTX 3090 Ti custom variants, according to reports from TweakTown and Videocardz. The graphics card was unveiled at CES 2022 a few weeks ago, and NVIDIA claimed that more information (specs, pricing, and availability) will be available later this month.

According to this new source, AIBs were also supposed to launch their unique models, but this may be postponed.

The NVIDIA GeForce RTX 3090 Ti flaws, according to Videocardz, are tied to the BIOS and hardware design, implying that it is not only a software issue but also a flaw in the reference PCB design that AIBs use to construct their bespoke models.

NVIDIA doesn’t just make one PCB for its Founders Edition boards; they also produce a reference PCB for AIBs that they may utilize as a starting point for their PCB designs. However, this hasn’t gone well for NVIDIA, as the PCB is now displaying design problems, necessitating a pause in production.

If past leaks are right, NVIDIA has made many adjustments to the GeForce RTX 3090 Ti. It not only has a full GA102 GPU core, but it also has a fresh new PCB design with dual-capacity 2 GB GDDR6X dies with up to 21 Gbps speeds, a crazy 450W TDP, and is rumored to have a PCIe Gen 5 interface and power connector (16-pin). One of those is likely to have failed to go as planned for NVIDIA.

NVIDIA has yet to confirm any of these stories, although they do have a leg up because the card’s debut or availability date was never publicly published. We were just told that we’d learn more about the GeForce RTX 3090 Ti later this month, and that could still happen. The rumored debut date indicated that the card will be completely presented on January 27th, although embargoes and NDAs on unreleased cards are always changing. We just noticed Gigabyte list some of its custom models at EEC, thus they could be part of the batch that has been affected by the faults and will need to be recalled.

The GA102 GPU is at the heart of the NVIDIA GeForce RTX 3090 Ti graphics card. The GA102 is one of some Ampere GPUs that will be available in the gaming market. NVIDIA’s GA102 GPU is the company’s fastest gaming GPU to date.

The GPU has a total of 28 billion transistors and is based on Samsung’s 8nm proprietary manufacturing node created particularly for NVIDIA. It has a surface area of 628mm2, making it the second-largest gaming GPU ever made, just behind the Turing TU102 GPU.

The new shader core on the NVIDIA Ampere architecture is 2.7x faster than the previous generation Turing GPUs, while the new RT cores are 1.7x faster and the new Tensor cores are up to 2.7x quicker. The 2nd Generation RT core has double the ray/triangle intersection with concurrent RT graphics and computes operations, as well as specialized hardware-accelerated ray-tracing speed.

The GeForce RTX 3090 Ti has 240 GB of RAM, utilizing the next-generation GDDR6X architecture. The RTX 3090 Ti supports GDDR6X memory rates of 21 Gbps thanks to Micron’s freshest and finest graphics memory chips. With this and a 384-bit bus interface, a total bandwidth of 1008 Gbps will be achieved.

Battlefield 2042 brings back the Run mode