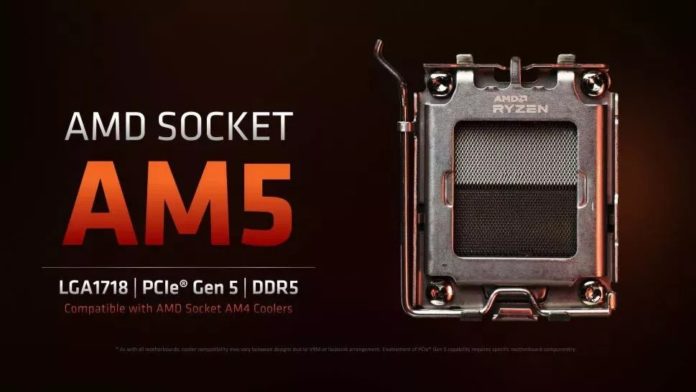 As we approach 2022 and witness a new struggle form for the top spot on our list of Best CPUs, AMD’s Socket AM5 will be a significant change for PC DIYers. The socket will be available in the second part of the year, with AMD Ryzen 7000 ‘Raphael’ CPUs based on Zen 4 and manufactured on TSMC’s 5nm technology. Today, Igor’s Lab released diagrams purporting to show the new CPU-to-motherboard design and assembly, as well as some fascinating details on AMD’s transition from PGA to LGA sockets.

AMD Socket AM5 is expected to be released in the second half of this year, with the first motherboards supporting AMD Ryzen 7000 ‘Raphael’ CPUs. LGA1718 is the name given to the new AMD-designed LGA socket, which features 1718 pins. The AMD 600-series chipsets will be launched with the first motherboards that use this socket. Furthermore, AMD just released it’s Ryzen 6000 ‘Rembrandt’ APUs for mobile devices, and desktop versions of these APUs will be available for Socket AM5 at a later date.

AMD’s switch from PGA to LGA will be well received by PC enthusiasts, as it should reduce the number of contact pin injuries. The LGA format naturally protects the 1718 delicate pins by nestling them in the motherboard socket and keeping them covered until seconds before CPU installation.

AMD’s LGA socket appears to be a close relative of Intel’s socket, which makes sense. Igor’s diagrams, on the other hand, demonstrate some more delicacy and thought from AMD. Igor believes we’re looking at AM5 v2 since it has better stiffness and pressure distribution than a previous generation he’s seen.

The Force Frame is marked in blue in the diagram to the left. It has two pressure-spreading lugs as well as the Cam Force Application Region, which is a large lug. Furthermore, the design is stated to combine the robustness of the AM4 backplate with up to eight attaching points for even pressure distribution.

According to the source, a dual-point fixed cooler with a capacity of 500g can be used. Backward compatibility with a wide range of AM4 coolers should be simple thanks to these mounting points. Cooler designs with their backplates, on the other hand, would need to be altered. Another thing to keep in mind is that coolers weighing less than 500g will almost certainly need the four outside screws of the Stiffener Frame assembly to be married up and replaced.

PCIe 6.0 is official and can deliver speeds up to 64 GT/s