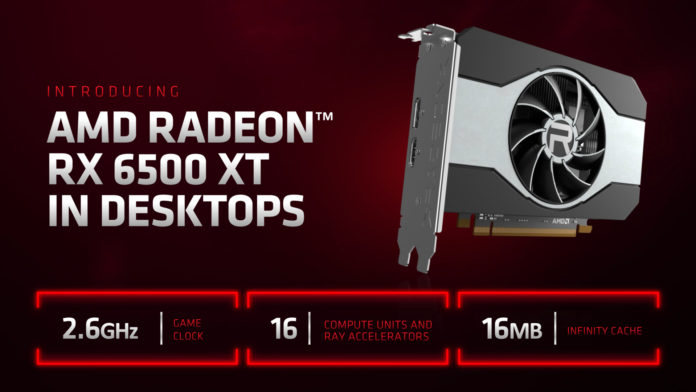 AMD’s Radeon RX 6500 XT has only introduced a few days ago for $199 US, and AMD is convinced that it will be the most accessible graphics card released in the last two years, and they’ve taken many efforts to ensure that it is. Some of these efforts are discussed in an article here, which includes interviews with AMD’s CEO, Dr. Lisa Su, Head of Technical Marketing, Robert Hallock, and Gaming Chief, Frank Azor, which were published by PCWorld and HotHardware.

To keep things simple, the AMD Radeon RX 6500 XT has 4 GB GDDR6 RAM, a PCIe Gen 4.0 x4 interface, and lower encoding/decoding capabilities than other RDNA 2 GPUs because it targets the entry-level and sweet-spot 1080p gaming niche. The first two have been put in place deliberately to ensure that this card is the least appealing option for crypto miners, but the third is a risky approach. AMD’s CEO, Lisa Su, stated just a day ago that the $199 US price isn’t just on paper, but will be what you’d expect the card to cost.

However, it appears that retailers and distributors all over the world have different intentions for entry-level cards. The AMD Radeon RX 6500 XT will cost 299 Euros in France, according to CowCotland (via Videocardz) (including taxes). That’s a 50% increase above the MSRP, and it’s in line with the retail GPU segment’s inflated pricing for other cards like the RX 6600 and RX 6600 XT. While this is only from one merchant, it appears that the card will not be available at the quoted MSRP of $199 US / 199 Euros for the vast majority of customers, if not all.

Aside from that, fans on AMD’s Reddit have noticed that the Radeon RX 6500 XT has the same TFLOPs as the Radeon RX 480 from 2016, which also started at $199 US for the 4 GB variant and was available at that price, unlike the current generation of cards.

Also, because the PCIe interface is only x4 lanes, some users running non-Gen 4 platforms may experience a bandwidth bottleneck. While this means Gen 3.0 x8 bandwidth on a Gen 4 motherboard, a Gen 3 motherboard will be limited to just x4 lanes, resulting in half the bandwidth of the Gen 4 interface (4 GB/s vs 8 GB/s).

While the AMD Radeon RX 6500 XT is based on a completely new 6nm GPU architecture and has advanced driver and feature support such as RSR and FSR, it will be interesting to see how it compares to competitors like the RTX 3050, which has a US MSRP of +$50. (again not going to see it on that price). So far, AMD’s stats show the RX 6500 XT outperforming the GTX 1650, and the same is true for NVIDIA’s RTX 3050. Because neither company provided specific results, buyers should wait for final ratings and retail prices before deciding which is the better entry-level option for them.

Previous articleLenovo Smart Clock 2: The new smart home device is here to make day-to-day tasks easier for every Indians
Next articleThe AirPods Pro 2 is scheduled to be released later this year, as the company’s suppliers get ready for delivery