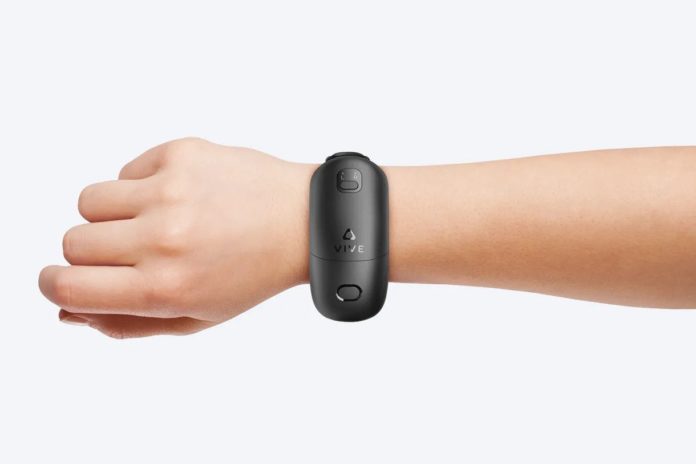 HTC is releasing a new wrist-based controller for its Vive Focus 3 VR headset. The Vive Wrist Tracker is a wireless device that wraps around a user’s arm like a watch and tracks their orientation and location from hand to elbow. It’s meant to supplement the existing controllers on the business-oriented headset, especially for simulation and training scenarios where body posture is crucial. It’s part of a bigger set of new features HTC announced at CES, including a VR experience powered by 5G.

The Wrist Tracker looks a lot like HTC’s Vive Tracker device, which launched in 2017. It’s small, light, and specialized. It comes with a strap and a toggle that determines whether the tracker should be worn on the left or right arm, but unlike the multi-buttoned Vive Focus 3 controllers, it’s designed to connect to the headset wirelessly and communicate movement data without requiring the headset’s cameras to view it. Flaim recalls using it to guarantee that users were carrying a virtual fire extinguisher in the correct position — something that a portable controller alone couldn’t always identify — and Taser maker Axon would reportedly integrate it into its VR training system.

The Wrist Tracker will be available in the first quarter of 2022 for $129. It’s not designed for customers, like the Vive Tracker and the $1,300 Vive Focus 3, and it’ll be most useful with experiences that are built particularly to make use of it. It is, however, one of HTC’s less exotic accessories, a category that includes a sophisticated lip tracking device. HTC will make a CAD file of the Wrist Tracker design available so that users can make their accessories, such as custom docks or harnesses.

HTC has also announced the release of a “portable, private 5G experience” in collaboration with Lumen Technologies. It’s a Vive Focus 3 program that offloads the majority of the data processing to a distant computer and transmits it over a private 5G network using Lumen. Since experiences can require a lot of computational power transmitted with minimal latency to headsets, mobile VR has been a long-standing potential use case for 5G networks — though it hasn’t been transformative in the sector yet.

Previous article“Archive 81”: Netflix has the trailer of the supernatural thriller series
Next articleISL 21/22: 3 talking points as SC East Bengal hold Mumbai City FC to a 0-0 draw

HTC A101 tablet launched with 10-inch LCD and Unisoc chip