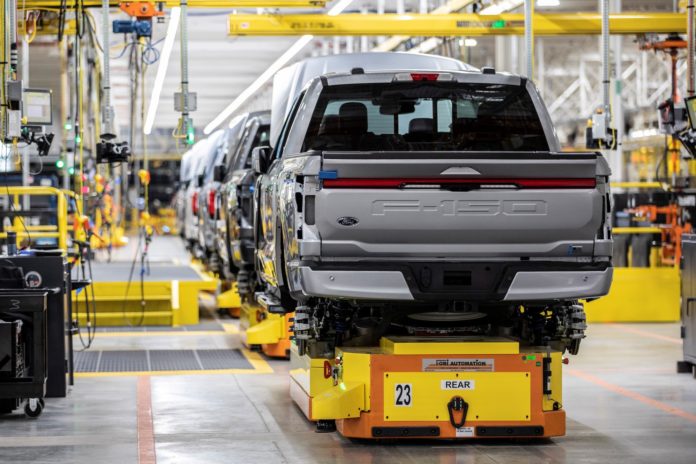 The car company Ford has stepped forward with such new efforts having double production capacity with the F-150 Lightning electric pickup to 150,000 vehicles per year, which is amazing.

The company follows that it has been capped the pre-orders at 200,000 units. The CEO Jim Farley says, “ We are completely oversubscribed with our battery electric vehicles.” Additionally, the company will begin inviting the first group of reservation holders to place orders also for the F-150 Lightning beginning on Thursday, January 6th.

It has such boost production, Ford said it has been made a little task force of employees from “manufacturing, purchasing, strategy, product management, and capacity planning” for finding the ways to kick up the production. It has also been working  with such key suppliers ” to find ways to enhance the capacity of electric vehicle parts containing battery cells, battery trays, and electric drive systems,”

It has been noted that the F-150 Lightning is recently in the final prebuild phase before coming into mass production to retail and also for commercial customers with such supplies beginning from this spring. The target is to test the production of vehicles over a million miles with real-world customer conditions.

Ford said it has been using the wave-by-wave reservation process and also questioning pre-order holders for watching the invitation through email or checking their Ford.com account. The automotive company also indicates  that later pre-order holders might also have to wait for such vehicles from such following year

In this Spring, the delivers will start MSRP of $39,974 before any of the available tax incentives. There are also some of the reports that indicate to some dealers may be dinging with customers up to $30,000 extra as the first to get their vehicles.

Ford recently declared that they will increase their production by three times of the Mustang Mach-E to reach 200,000 units per year by 2023 having plans to have “ global capacity to produce 600,000 BEV Annually”, for that they are also making,” most advance, most efficient auto production facility in its 118-year history in  Tennessee,” with three battery plants built under the collaboration with SK Innovation. The total thing just represents an $11.4 billion investment along with 11,000 new creating jobs.

Now, the latest F-150 Lightning comes for a full $7,500 US BEV tax credit like today, but still, Ford is expecting to hit its 200,000 vehicle eligibility limit later this year.

Previous articleApple’s AR Headset will equip Three Displays and Micro OLED Panels with 4000PPI
Next article“Archive 81”: Netflix has the trailer of the supernatural thriller series