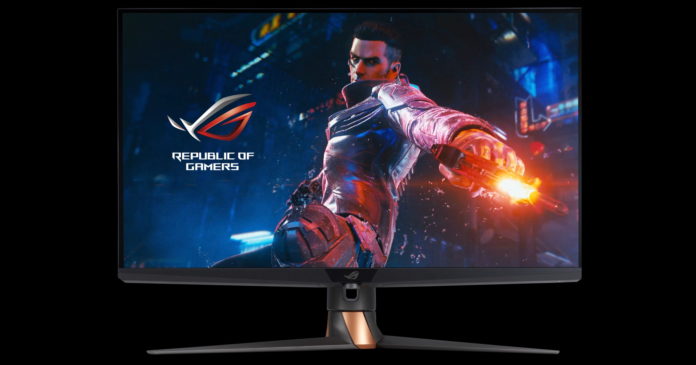 The new ROG Swift PG32UQXE gaming monitor comes with a long-range of high-end technologies that enable the fastest refresh rates and the most vibrant colour reproduction at a price geared to ardent gamers searching for a good deal.

The PG32UQXE shares many of the same specs as ROG’s ultra-high-end PG32UQX. Of course, everyone benefits when cutting-edge technology is refined. Both models have a 32-inch screen with a 4K native resolution, mini-LED backlighting with full-array local dimming (FALD), NVIDIA G-SYNC Ultimate certification, and a quantum-dot layer to help replicate the most vibrant, rich colours you’ve ever seen.

The PG32UQXE even has a few things that the flagship doesn’t. It has a slightly faster 160Hz refresh rate that can be overclocked, resulting in smoother action and the possibility for faster response times in competitive games.

When combined with an NVIDIA Reflex mouse, it also features the NVIDIA Reflex Analyzer, which measures end-to-end system latency. It also includes an HDMI 2.1 connector, allowing users of the PlayStation 5 and Xbox Series X to enjoy 4K with a 120Hz frame rate and the greatest image quality.

Since introducing the world’s first 32″ mini-LED gaming monitor one year ago, we’ve come a long way. The PG32UQXE also benefits from AUO’s brand new Adaptive mini-LED (AmLED) panel technology, which lowers the cost of various premium features. It’s designed specifically for gamers (and their wallets), but it still manages to provide a peak brightness of 1000 nits, which is more than three times that of conventional displays, according to VESA. Even in well-lit settings, where an OLED-based panel would usually be overwhelmed, AmLED retains its radiance.

The PG32UQXE likewise has a lot of contrast. Its FALD backlight independently regulates each of the 576 LED zones, resulting in a wide dynamic range between bright whites and inky black tones produced by local dimming. But don’t take our word for it. A maximum black level luminance of 0.05 nits is achieved with DisplayHDR 1000-validated performance (in addition to a minimum peak luminance of 1000 nits).

The PG32UQXE’s gamut is supercharged by a layer of quantum dot nanoparticles on top of the mini-LED backlight, which covers 97 percent of the DCI-P3 cinema-standard colour space. At whatever brightness level, quantum dot technology maintains its amazing colour performance natively. The sophisticated AmLED panel is also resistant to burn-in and brightness decline. So, no matter how long you leave the PG32UQXE switched on, you can trust it to offer spectacular graphics from every angle and in any ambient setting.

The ROG Swift PG32UQXE is designed to help gamers win.

The PG32UQXE’s specifications seem like a bulleted wish list if you’re a competitive player looking for a leg up. The 4K resolution, 160Hz OC refresh rate, G-SYNC Ultimate distinction, and NVIDIA Reflex Analyzer would be our top picks if we had to pick significant highlights to focus on.

While high-resolution monitors aren’t new, graphics cards capable of rendering triple-digit frame rates at 4K are. The ROG Swift PG32UQXE is ideal for gamers with these powerful GPUs, especially those who enjoy fast-paced shooters with high refresh rates. In that genre (and others like it), an overclocked 160Hz refresh rate provides 11 percent more information to your eyes per second than a 144Hz display, increasing your chances of reacting ahead of your opponent.

G-SYNC technology synchronises the monitor’s refresh rate to the GPU’s output, delivering the smoothest animation imaginable, even if your graphics card can’t keep up with the PG32UQXE’s blazing-fast refresh rate. There are no stuttering, tearing, flicker, or artefacts if the G-SYNC Ultimate program’s rigorous testing is passed. Because the AmLED panel is controlled by NVIDIA’s latest G-SYNC engine, the PG32UQXE’s variable refresh range is unconstrained between 1Hz and 160Hz.

The built-in NVIDIA Reflex Analyzer on the ROG Swift PG32UQXE can also be used to swiftly analyse end-to-end latency. A compatible mouse attached to the monitor and a fast excursion inside the on-screen display is all that is required. Gamers can monitor latency in real time with this handy tool, ensuring that their rigs aren’t preventing them from reacting to the action as quickly as their reflexes will allow.

Enjoy the finest gaming experience possible on any device:

It’s an exciting moment to be a gamer right now. All recent systems support 4K at high refresh rates, whether you’re playing on a PC, PlayStation, or Xbox. The ROG Swift PG32QXE is an excellent match for any of them.

Display Stream Compression (DSC) is supported by the PG32UQXE DisplayPort 1.4 interface. It drives 4K, HDR material at 160Hz over a single cable using visually lossless compression. On the PlayStation 5 and Xbox Series X, an HDMI 2.1 connector has been added for native 4K, 120Hz output. Other playback devices and peripherals (such as webcams) can be connected using the PG32UQXE’s two additional HDMI 2.0 ports and a built-in USB hub.

Even before it arrives, we calibrate the PG32UQXE for Delta E values under 2, ensuring consistent colour fidelity from one monitor to the next. So, whether you’re gaming on a PC or a console, you can rest assured that your ROG Swift display will deliver accurate results.

Previous articleApple has been asked by the Indian government to provide products worth $50 billion each year
Next articleURBANISTA, Premium Lifestyle Audio Brand From Sweden enters In India