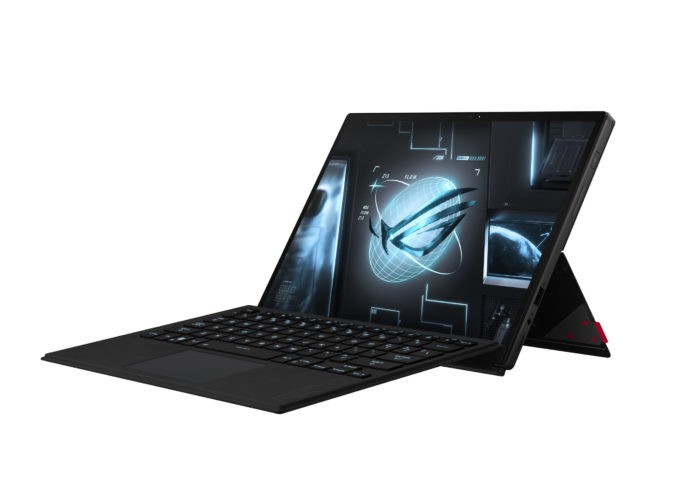 ASUS has launched a plethora of new gaming and among them two gaming laptops have been totally out-of-the-box, one being the ROG Flow X13 that was also introduced back in CES 2021, now updated with new hardware and the other being the new compact ROG Flow Z13 gaming laptop.

To compliment both of these gaming laptops, you have the 2021 XG Mobile eGPU with up to RTX™ 3080 and you can plug them in to maximize gaming performance instantly.

The ROG Flow Z13 shrinks the compact Flow series even further with the world’s most powerful gaming tablet. With Windows 11, up to a 14-core Intel Core i9-12900H, an NVIDIA GeForce RTX 3050 Ti laptop GPU, and 5200MHz LPDDR5 memory, this tablet packs plenty of gaming horsepower in an ultra-thin and light chassis. These specs are further bolstered by 1TB of PCIe® SSD storage, a MUX Switch, custom vapour chamber cooling, and fast charging via USB Type-C.

The Flow Z13 features two display options: a 4K 60Hz display with 85% DCI-P3 coverage, or a Full HD 120Hz screen with 100% sRGB coverage. Both displays are 16:10 with Corning® Gorilla® glass protection on the touch screen, Adaptive-Sync, 500nits of peak brightness, and Pantone® validation for accurate colours. Both of the Flow Z13 models feature Dolby Vision® for incredible picture quality.

The Z13 can be played multiple ways, from traditional mouse (using the included screen cover keyboard) to touch input or gamepads. Since the tablet form factor includes all the powerful components behind the screen, rather than under the keyboard, the ROG Intelligent Cooling solution gets plenty of fresh air for high sustained performance.

The Flow Z13 sports a retro-futurist design inspired by the 20th-century Space Race, but encompassing ROG’s vision for the future of gaming: ultimate portability. A CNC-milled window on the rear of the chassis allows a look straight into the machine’s mainboard, and the chassis is covered in spacecraft-inspired machining. The built-in kickstand can be opened up to 170 degrees for optimal usage in nearly any scenario.

For extra gaming horsepower and I/O expansion, the Flow Z13 and X13 are both compatible with the XG Mobile family of external GPUs. Connect it to the 2021 XG Mobile with an NVIDIA® GeForce RTX™ 3080, or this year’s new addition to the XG Mobile family, which includes an AMD Radeon™ RX 6850M XT GPU. With additional USB ports, DisplayPort and HDMI, and Ethernet, the XG Mobile is ready for anything.

Here are the detailed specs of the laptops: