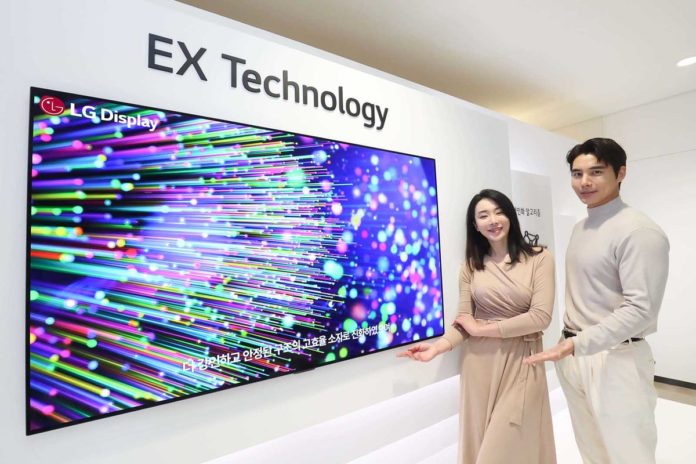 We noted a few days ago that LG had unveiled its new OLEX EX technology, which intended to boost brightness by up to 30% above current OLEDs offered by the Korean giant’s competitors.

With a boost in total brightness, the OLEX EX might be directly comparable to mini-LEDs, which can reach brightness levels of 2000 nits and more. More crucially, it can overcome one constraint that may tempt companies like Apple to employ it in the future.

The usage of deuterium compounds to allow the light-emitting diodes to create greater light, according to LG, is responsible for the OLED EX’s 30 percent brightness improvement. The blooming effect, which can be seen on Apple’s 12.9-inch M1 iPad Pro, will not affect any product that uses OLEX EX, unlike mini-LED. Later, display analyst Ross Young stated that the lack of dimming zones on Apple’s flagship tablet causes the blooming effect and that if OLED were used instead, this minor but noticeable issue would not occur.

Although the OLEX EX does not outperform mini-LED in terms of overall brightness, it does outperform regular OLED in terms of contrast, which may prompt Apple to investigate the technology further, as the latter has been reported on multiple occasions to switch to OLED from mini-LED for various products. OLED technology is also less expensive than mini-LED, which will benefit Apple, but it’s unclear that the company will pass those savings on to customers.

The iPad Pro line is believed to be the receiver of the shift from mini-LED to OLED, however, it may arrive in 2023 as an LTPO variety, allowing the tablet to dynamically vary its refresh rate to save battery life. Apple is also rumored to be working on an OLED MacBook, but this isn’t expected to happen until 2025, and even then, there’s a risk the entire device may be canceled due to manufacturing and cost concerns.

Previous articleIs the FIFA World Cup 2022 in Qatar a disgrace to football?
Next articleIntel is cutting off AVX-512 support from its Alder Lake lineup