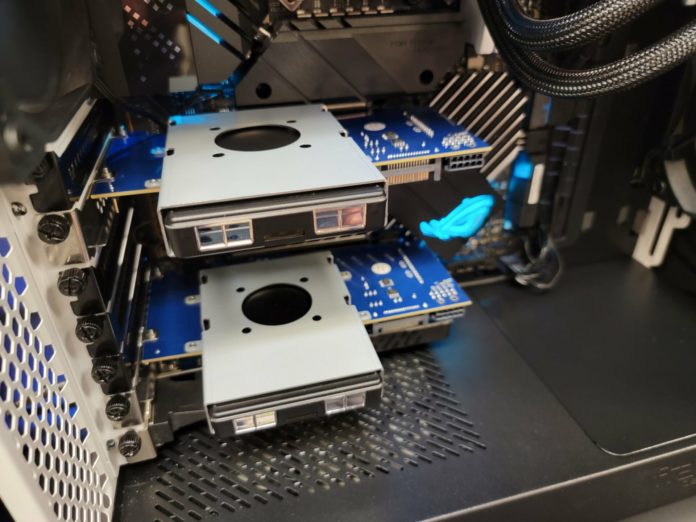 Intel has tested the compatibility of their Core i9-12900K Alder Lake processor with Samsung’s PM1743 PCIe 5.0 x4 SSD, which was just launched. The result is both surprising and predictable: the platform achieved a throughput of around 13.8 GBps in the IOMeter benchmark.

Intel had planned to exhibit the demo at CES, but it will no longer be there. As a result, Intel’s chief performance strategist, Ryan Shrout, opted to broadcast the demo on Twitter. A Core i9-12900K processor, an Asus Z690 motherboard, and an EVGA GeForce RTX 3080 graphics card were used in the demonstration. Samsung’s PM1743 SSD was connected to Intel’s PCIe 5.0 interposer adapter, and the drive performed admirably.

Although 13.8 GBps may be overkill for most desktop users, those who need to play massive games, work with enormous 8K video files, or view ultra-high-resolution photographs may benefit from the extra speed. However, there is one minor snag with this demonstration.

Samsung is expected to be one of the first to sell its PM1743 PCIe 5.0 drives, which is why Intel chose this SSD for the demo. Samsung’s PM1743-series, on the other hand, is aimed at businesses, therefore it will be available in 2.5-inch/15mm form-factors with dual-port support and new-generation E3.S (76 112.75 7.5mm) form-factors (and Intel admits that).

Meanwhile, several companies (Adata, Phison, and Silicon Motion) are developing PCIe 5.0 SSDs and SSD controllers for client PCs, so we’ll likely learn more about their technology or maybe see it in action next week. These drives will eventually make our list of the finest SSDs, but we don’t know when.

PCIe 5.0 offers a bandwidth of 32 Giga transfers per second (GT/s), doubling that of PCIe 4.0. Leveraging a proprietary controller designed to support the latest PCIe standard, the PM1743 will deliver outstanding read and write speeds to accommodate the rapidly increasing performance requirements of data centers.

Samsung’s PM1743 will feature a sequential read speed of up to 13,000 megabytes per second (MB/s) and a random read speed of 2,500K input/output operations per second (IOPS), offering 1.9x and 1.7x faster speeds over the previous PCIe 4.0-based products. Moreover, write speeds have been elevated significantly, with a sequential write speed of 6,600 MB/s and a random write speed of 250K IOPS, also delivering 1.7x and 1.9x faster speeds, respectively. These remarkable data transfer rates will allow enterprise server manufacturers deploying the PM1743 to enjoy a much higher level of performance.

PCIe 5.0 support is probably one of the primary selling factors of Intel’s 12th Alder Lake processors. Due to the lack of PCIe 5.0-capable graphics cards and SSDs on the market at the time of the platform’s launch in November, Intel was unable to demonstrate any benefits of the next-generation interface.

Samsung is the first company to sell PCIe Gen 5.0 compliant enterprise SSDs, but we can expect additional companies to join the consumer/enterprise bandwagon later next year as AMD and Intel’s next-generation CPU platforms adopt Gen 5.

AMD AM5 Ryzen CPU architectures getting support for HWiNFO