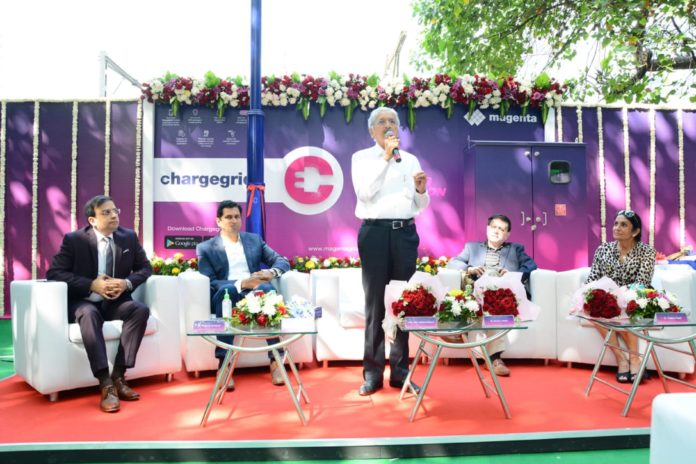 The first of its kind public charging station will be functional 24*7 initially with the unique Made in India Streetlamp Integrated EV Charging Stations (ChargeGrid FLARE) and subsequently with DC Fast chargers. This combination of AC and DC chargers will support 2-wheelers, 3-wheelers and 4-wheelers. These chargers can be operated through the ChargeGrid App with online remote monitoring which includes an automated payment gateway, thereby eliminating the need of having a station marshal to monitor, maintain & operate the chargers at the location.

Magenta is currently installing 4500 chargers across 108 cities in India (2950 chargers under the FAME-2 scheme along REIL; more than 1200 chargers along Petrol stations such as HPCL and others; 82 at FERN Hotels; Residential chargers in collaboration with Government of Delhi; Residential chargers at Bengaluru Apartment Federation). This will support the government initiative of setting up 400,000 charging stations to meet the requirement for two million Electric Vehicles (EV) that could potentially ply on its roads by 2026.

Mr. Maxson Lewis, MD & Co-founder of Magenta Group said, “Installing EV chargers at Mumbai Railway Stations is a dream come true for me at a personal level. The adoption of electric Vehicles cannot be said to have taken off, if the common man’s concern of EV charging is not addressed; and what better than making EV charging available at the most synonymous locations for Mumbai’s common man – railway stations.”

Dr. Kiran C Patel said, “I’m proud to be associated with the Magenta family, to make my vision of an EV ready India possible. This initiative of Street lamp based EV charging station at a railway station is unique, since it’s Made in India and Made for India”

Shri. Subhash Desai, Hon. Minister of Industry and Mining said,“We are glad to see Magenta with Central Railways pushing ‘green initiatives’ and setting up EV charging stations addressing the lack of the charging infrastructure for EVs to operate smoothly. This initiative will bring relief to people who can charge their EVs at key locations near Railway stations as well.”

Previous article
Warzone Payload mode: Gameplay details and how to win in Season 4 Reloaded
Next article
Here is the list of upcoming films releasing on Amazon Prime Video in January 2022

Strengthening its operations in India, Magenta aims to hire over 340+ employees in 2022