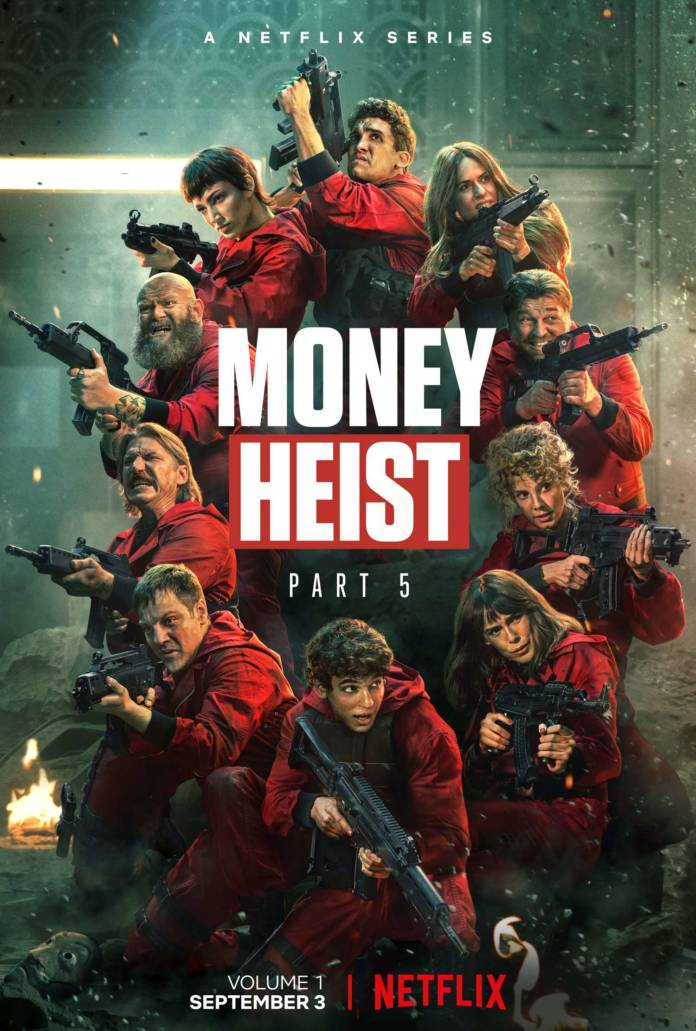 Money Heist Part 5 Volume 2 is going to be an adrenaline-fuelled season, fully loaded with power-packed actions and some intense emotions. After watching the trailer and getting to know about the titles of the five episodes, it seems it is definitely going to be the same as we are expecting.

On Wednesday, the makers of the Netflix show named Money Heist has released the names of the episodes along with one still from each episode, by giving us a hint about what is on its way in the upcoming plot. The last episode of the Part 1 Volume 1 was “Live Many Lives” which perfectly described the end of Tokyo’s chapter.

Here we present the trailer of Money Heist Part 5 Volume 2:-

Here we present the list of the titles of five episodes of Money Heist Part 5 Volume 2:-

It is the title of the first episode of Money Heist Part 5 Volume 2 i.e. episode number 6. It has been seen that Rio was holding a bazooka and has anger in his eyes and is probably armed up in order to invade the army who has killed his lady-love Tokyo.

It is the 7th episode, it seems, it has taken us to the flashback of Berlin and Palermo. The picture that has been shown along with its title depicts that it will show us their incomplete love story as it is a happy picture.

3. The Theory Of Elegance- 8th Episode

It is the 8th episode, it also seems to show us some happy moments in between the gang members in their time of distress. They all are seen singing and dancing but we can obviously guess that it is going to have a bloody finale.

It is the 9th episode and it shows us The Professor in his signature night suit. The still along with the title that has been attached was again looks like it is from the flashback. Although, what the title going to show us is still not clear.

It is episode number 10. The picture that is attached with the title shows us that Colonel Tamayo is interrogating Denver and the background seems to be inside the Bank of Spain. It seems to be very confusing but excited. Till now, we have not seen the two coming face-to-face. But it is quite obvious that the ending will turn the tables and will give us some major twists.

After watching the still, a question has arisen that will Denver become a pawn in the hands of the police or will Tamayo give in to the robbers? The answer to this question will be given on 3rd December 2021 as soon as the Money Heist Part 5 Volume 2 releases on Netflix.

It has also been seen in the trailer that The Professor himself is also set to enter the bank to take things under control again. whether there is Plan B or there is something more to meet the eyes.

So, in order to get all the answers to the question, we have to wait for the Money Heist Part 5 Volume 2 to get its release.

Read:- Money Heist part 5 Volume 2: New teaser out; All the latest updates about the release date and cast