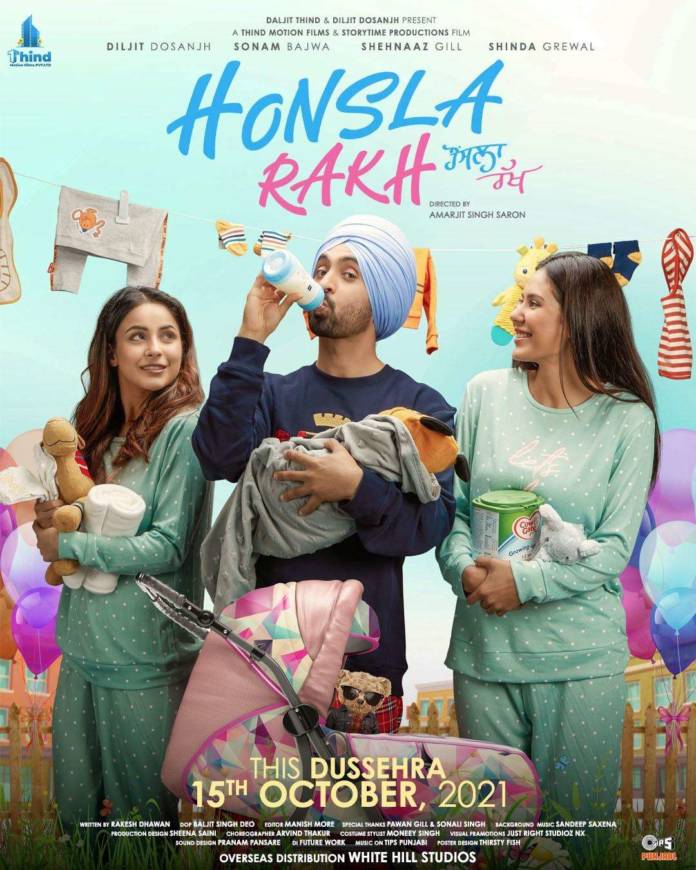 The film Honsla Rakh is now all set to get an OTT release. Diljit Dosanjh, one of the main characters of the film was relaxing as the film gained great success, but he got another reason to celebrate as it has come to know that the film is going to stream on Amazon Prime video for its release OTT release on 24th November.

The film Honsla Rakh, a Punjabi romantic comedy-drama, starring Diljith Dosanjh and Shehnaaz Gill. The film Honsla Rakh tells us about the story of a single father named Yenkey Singh played by Diljith. He found his love once again in Jasmin played by Sonam Bajwa, but his life once again goes on a toss after his former partner returns back to him, played by Sahehnazz Gill. Gippy Grewal’s son Shinda Grewal essays the role of Diljit’s son Honsla Singh in the movie.

The film Honsla Rakh is directed by Amarjit Singh Sarom and written by Rakesh Dhawan.

While talking about the film, Diljit has said in a statement, “Honsla Rakh is special for more reasons than one. Not only does it mark my debut as a producer but also narrates a heart-warming tale of human emotions that’s sure to strike a chord with the audience. I am happy to collaborate with Amazon Prime Video for this film and take this beautiful story to a wide expanse of audience across the globe at once, and give them a chance to enjoy it at their convenience and from the comfort of their homes.”

The filmmaker Amarjit Singh Saron, while sharing his excitement about the release of the film Honsla Rakh on Amazon Prime Video has said, “As a filmmaker, there is no greater joy than seeing your story resonate so strongly with the audience world over. Honsla Rakh is an emotional tale told through a relatable and endearing plot. It was incredible to work with Diljit Dosanjh and Daljit Thind, and we are thrilled by the response the film has already received. I am thankful to Amazon Prime Video for taking our homegrown stories to viewers the world over and looking forward to the release on the service.”

- Advertisement -
Powered by JustWatch
Share
Facebook
Twitter
Pinterest
WhatsApp
Linkedin
Previous articleMagenta signs MoU with the Government of Tamil Nadu to invest over Rs. 250 crores to set up an EV manufacturing plant
Next articleVIK-on has modded and doubled the VRAM capacity of the renowned NVIDIA RTX 2060 GPU