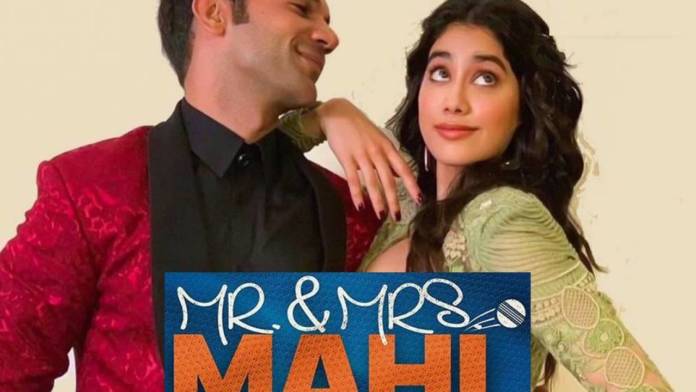 Mr. and Mrs. Mahi, the upcoming film of Dharma productions, starring Janhvi Kapoor and Rajkummar Rao are all set to share the screen together once again after spooking the audience with Roohi. Dharma Productions has made an announcement on Monday i.e. 22nd November 2021 about the project along with a short video. The video itself gives us a hint the film basically revolves around cricket. The video features a blue jersey, a cricket ball and it also introduces Janhvi and Rajkummar as Mahendra and Mahima.

The film Mr. and Mrs. Mahi is going to be directed and co-written by Sharan Sharma, who has also helmed Gunjan Saxena, The Kargil Girl.

Mr. and Mrs. Mahi- Reactions about the film

Dharma Production has posted a video in its own Twitter handle along with a caption that reads, “It takes a partnership of the hearts to achieve a dream! Presenting #MrAndMrsMahi, a match made for the winning streak! Coming to cinemas near you on 7th October 2022”.

Rajkummar Rao has also written on his social media handles after the announcement of the film Mr. and Mrs. Mahi. He said, “Sometimes you can’t chase your dreams, alone! Excited for this partnership on the field with Janhvi Kapoor, directed by Sharan Sharma. See you in cinemas on 7th October 2022”.

Karan Johar has also posted on his Instagram account about the upcoming film Mr. and Mrs. Mahi along with the caption, “One dream, chased by two hearts. Presenting #MrAndMrsMahi, directed by Sharan Sharma who is back with another heart-warming story to tell with his touch of magic! Starring Rajkummar Rao & Janhvi Kapoor, a partnership to look forward to. See you on the field aka the cinemas on 7th October 2022”.

Both the actors Janhvi Kapoor and Rajkummar Rao have a bucket full of lists of their upcoming films. Janhvi has Dostana 2 and Good Luck Jerry in her kitty on the work front. Rajkummar has Badhaai Do, HIT: The First Case and Monica, O My Darling in the pipeline.

Read:- Rohit Shetty is likely to introduce a female cop in his universe, this film will also be like Sooryavanshi and Singham’s scale

Koffee With Karan (Season 7- Episode 12): We Will See Gauri Khan, Bhavana Pandey, and Maheep Kapoor on the Koffee couch

HIT The First Case, starring Rajkummar Rao is going to stream on Netflix

Janhvi Kapoor takes training from Dinesh Kartik to play a role of a cricketer in her upcoming movie Mr. and Mrs. Mahi