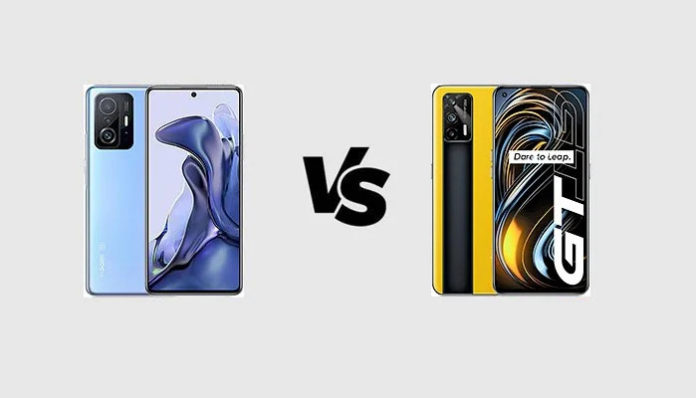 Flagship killers are becoming more premium by the day, thanks to brands such as Xiaomi and Realme. The former has just launched a new flagship series in the European market which includes the new Xiaomi 11T, a device sold at an amazing price point considering its specifications.

However, there is another device that is being slept on, a formidable competitor to the Xiaomi 11T, from a company that has had an outstanding year, Realme’s Realme GT. With the exception of the OnePlus Nord 2, these two are definitely the best flagship killers out there in the  €400-500(34,054 INR-42,567 INR) released in the last period.

This comparison will help you to understand which is the best flagship killer between the latest ones released by Xiaomi and Realme.

If you opt for the Racing Yellow color variant of the Realme GT 5G, you get the most original design you can currently find on the flagship killer segment in the European market.

The Realme GT 5G Racing Yellow comes with a leather back and an aluminum frame providing an amazing touch and feel and a solid grip, as well as stunning aesthetics.

The cherry on the top is the Gorilla Glass Victus protection for both the glass back and the display, besides being more impressive, the Realme GT 5G is also lighter than the Xiaomi 11T.

On paper, the Xiaomi 11T has an excellent display. With a diagonal, that is wider than 6.67″. Further, it is able to show up to one billion colors with a 120Hz refresh rate and HDR10+ certification.

The color reproduction is definitely better than the Realme GT 5G, but the latter comes with an in-display fingerprint leader, while Xiaomi 11T has a side-mounted fingerprint scanner. Both the phones have an AMOLED display with a Full HD+ resolution.

If you are looking for the most advanced hardware, then you should choose the Realme GT 5G, the Snapdragon 888 mobile platform is undoubtedly more powerful than the MediaTek Dimensity 1200 SoC that can be found on the Xiaomi 11T.

Further, with the Realme GT 5G, you can get 12GB RAM, while the max amount of RAM provided by Xiaomi 11T is 8GB. The phones run Android 11 out-of-the-box and will get at least two major updates to new Android versions. They support 5G and also come with powerful stereo speakers.

The Xiaomi 11T is not a high-end camera phone, but it is still better than the Realme GT 5G thanks to its superior 108MP main camera. Further, it has a better macro with a 5MP resolution, even though macro cameras are not very useful due to their low resolutions.

With the Xiaomi 11T, you should get slightly better photos with a higher level of detail.

The battery became a very important aspect of flagship phones because they have a high-energy consumption due to their powerful and high-refresh rates.

Both the phones support very fast charging technologies with powers of 67W and 65W, respectively.

The Xiaomi 11T has a better display, as well as a superior camera and bigger battery, while the Realme GT 5G offers a stronger hardware build and a more attractive design at an affordable price point.

So, ultimately, which model should you go for? Both are amazing flagships and both carry amazing prices, so it is mostly a matter of tastes; either way, you will get an excellent user experience at great prices.

So, did this piece help you in making a decision? Which device would you opt for? Let us know!