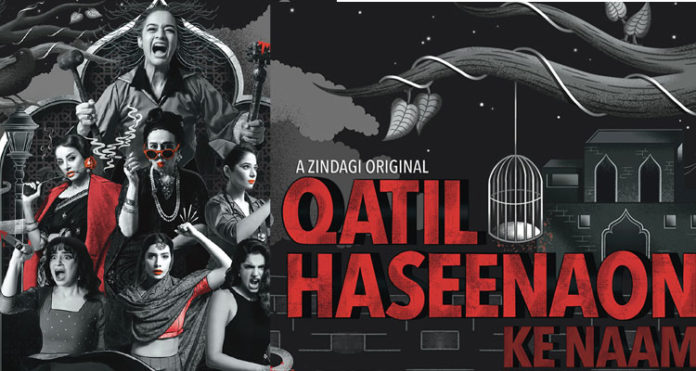 ZEE 5 has dropped the trailer of the upcoming anthology series. In the world woman is the symbol of patience, sacrifice, endurance,  love, and care. This time ZEE 5 is set to break all of this stereotype and also will unearth their unapologetic side of the woman in the latest original Qatil Haseenaon Ke Naam.

It seems that the story of the show is based on the six stories of the seven-woman who have been wrestling back the control and will rewrite the word of femme fatale.

The story of the series has been written by Farjad Nabi and gaur,  it is basically revealed abou7t the timeless lanes of Androon Sheher that is a mythical neighbourhood and has been showcased the stales of love, lust, power, and also redemption woven into the web of the betrayal, angst, ad also revenge. We will see each of the stories will reveal the fearlessness of women and also about their determination to take revenge deceit. This series is also filled with mystery, suspense, intrigue, also with such twist endings.

At the time of saying about her current offering, Gaur has said that this idea for the series was like an outpouring for her and it is no surprise that the stories here are based on all of that which is surges within the women mainly love, passion, ambition, conviction, rage, revenge, and revolution in his male-centric gaze mainly in this noir category.

She was interested to explore the latest perspective of the much-maligned femme fatale characters. She thinks it is correct that the sexism of the film noir and will try her hands at the feminist noir.

The co-writer Nabi has said that this series just bid a goodbye to the victim woman like the seven Fatales that has got their path along with the methods that are literally unexpected and sometimes also horrible but always liberating.

He is also very glad as this show will premiere on the Zee5 platform and focus on bringing diverse and significant tales to global audiences.