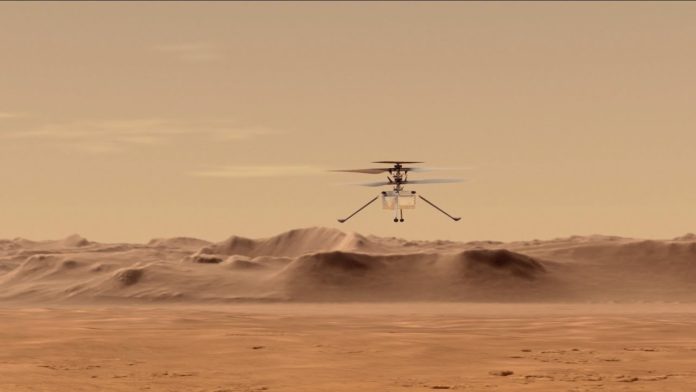 NASA’s Mars Perseveranc finished its twelfth flying duty on Mars, and it recorded its aviator twin, Ingenuity, in remarkable detail. The most thorough film of Ingenuity in action to yet was recorded on September 4th of this year.

NASA’s rotorcraft, Ingenuity, got a trip to Mars on the Perseverance rover’s belly and both had taken off from Florida’s Cape Canaveral Air Force Station in July 2020 and landed on Mars on February 18, 2021.

The Mars Helicopter is a controlled flying demonstration and test on another planet and the first flight was recorded on April 19, 2021, when it rose to roughly 10 feet (3 metres) above Mars’ surface, hovered momentarily as it completed a circle, and then landed.

Perseverance acquired footage from Ingenuity’s twelfth trip and its Mastcam-Z, the rover’s two camera eyes, have captured the photographs in question. According to Justin Maki, the Mastcam-Z instrument’s deputy principal investigator at NASA’s Jet Propulsion Laboratory in Southern California, “The value of Mastcam-Z really shines through with these video clips. Even at 300 meters (328 yards) away, we get a magnificent closeup of takeoff and landing through Mastcam-Z’s ‘right eye.’ And while the helicopter is little more than a speck in the wide view taken through the ‘left eye,’ it gives viewers a good feel for the size of the environment that Ingenuity is exploring.”

In the video, we can see the Ingenuity utilising its laser altimeter as it adjusted to the height of the landscape below while travelling northeast toward the ridgeline in the footage shot by Perseverance.

The helicopter can also be seen automatically correcting as it ascended slightly as it approached the ridge, then dropping to maintain its 26-foot height over the ground (8 meters). After that, Ingenuity soars out of view as it captures photographs of the outcrop before returning to the Martian surface.