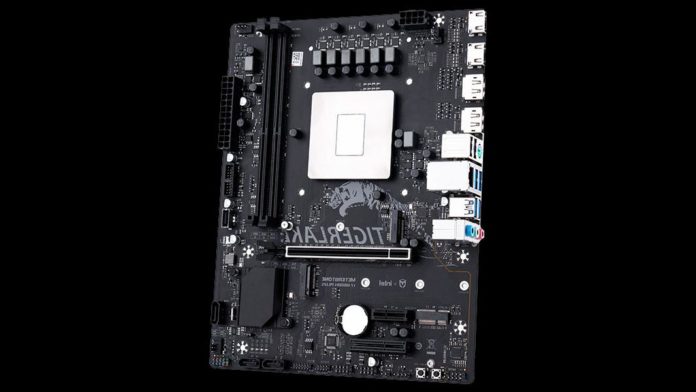 The MS- (Milestone) i7-11800H Plus motherboard was just released by Maxsun, a Chinese hardware company. The motherboard is notable for being based on Intel’s Core i7-11800H, a mobile Tiger Lake processor.

The MS-Milestone i7-11800H Plus is a regular micro-ATX motherboard with Intel’s HM570 chipset and a black PCB. The motherboard contains a seven-phased power supply subsystem with 50A DrMOS that can handle up to 200W of electricity. The Core i7-11800H is powered by an 8-pin EPS power connector on the motherboard, which is more than enough for the 45W Tiger Lake processor.

However, because the processor is soldered to the motherboard, there is no way to replace it. Also, the Core i7-11800H isn’t a slacker. The Core i7-11800H is based on Intel’s 10nm SuperFin technology and features eight Willow Cove cores with Hyper-Threading and 24MB of L3 cache. The processor has a base frequency of 2.3 GHz, but two cores can turbo to 4.6 GHz. At 4.2 GHz, the all-core boost is slightly lower. The Core i7-11800H includes Intel’s Xe graphics with 32 execution units clocked at up to 1.45 GHz if you don’t plan on using discrete graphics.

Although the Core i7-11800H comes with a modest heatsink, it still needs a CPU cooler. Maxsun did not clarify what type of motherboard mounting is required. The mounting holes, on the other hand, appear to indicate that the motherboard supports LGA 115x CPU coolers.

The MS-Milestone i7-11800H Plus motherboard has two DDR4 memory slots, allowing users to install up to 64GB of memory. Memory modules ranging from DDR4-2133 to DDR4-2933 and higher are supported by the motherboard. Three SATA III connections and two PCIe x4 M.2 slots are available for storage, one of which supports PCIe 4.0 and the other PCIe 3.0. The former accepts NVMe-based drives, whereas the latter accepts SSDs that are either NVMe or SATA-based. The MS-Milestone i7-11800H Plus additionally has one M.2 E-key slot for installing a wifi module. Maxsun’s motherboard features one PCIe 4.0 x16 slot, one PCIe x4 slot, and one PCIe x1 slot for expansion.