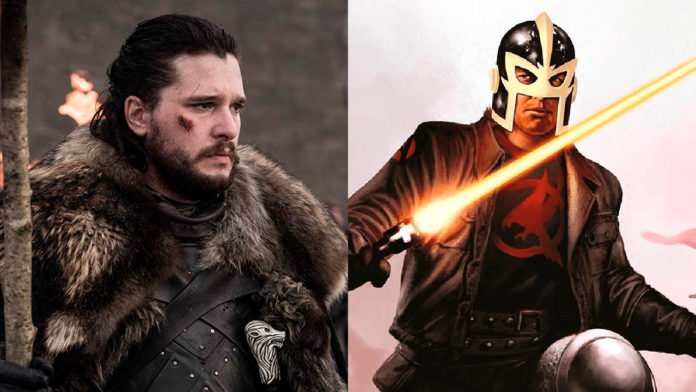 At first, while Marvel Studios first has revealed the cast of the Eternals, the studio has let everyone know that Kit Harington would play Dane Whitman, the alter ego of the superhero is popular as the Black Knight, and it is not also capable for the descendent of an Arthurian knight who has come into the possession of the curse of the ancestor sword

Recently, MCU has introduced a blot of new superheroes and also villains to the MCU. All the fans are waiting eagerly to meet the ancient heroes who have protected humanity for thousands of years. In the Eternals, it’s well known as the sword-wielding superhero Black Knight in the comics. It is true that Dane has not dressed up like Black Knight, but this transformation is just for a matter of time.

After Dane begins to tell Sersi about the complicated family legacy, she has snatched away by the big red robot Arishem. We have seen Dane be agitated as he steels himself for opening the long ornate wooden box. While the finale will make his mind open it, there is a whoosh of roaring air and also a whispering voice that has sounded.

He has read the Lati words that have been carved in the box: “ors mihi lucrum”, meaning “Death is my reward”. In the box, there was a long black sword with the blade writing with the kind of living darkness that has gravitated toward his outreached hand, like the iron filings have been attracted to a magnet.

There are many heroes and villains who have further carried the mantle of Black Knight, but Dane Whitman is the most enduring and famous of them all Dan also has a mystical sword that is named Ebony Blade and has been carried on to the heroic legacy of his ancestor, Sir Percy of Scandia.

He is definitely a precious member of the superhero team containing the Avengers, Defenders, Heroes for Hire, and Ultraforce. He has made a Romantic bond with Sersi and has created lasting ties if the Eternals. Dane itself was a scientific genius so he has replaced it with the technological sword that makes him perfect for the Avengers.

Often, Dane was tormented by his inner darkness, and the chanted sword also has been carried a blood curse that threatens o drive all of the users mad. After a lot of obstacles, Dane has proved himself as the mightiest warrior hero.

Dane Whitman has superhuman powers for speaking of, he is among the set swordsman in the Marvel; Universe and has happened to become a brilliant physicist. After making a close bond with Sersi along the ritual known as “Gann Josin”, Dane is temporarily has got the enhanced strength, speed, and also the durability. Later he has got the ability to watch through magical illusions.

It is true that most powers of the Black Knight will come from his weapons. This mystical Ebony Blade had been forged by merlin himself and also can cut along nearly any substance in this universe, magical or otherwise. The Ebony Blade also has the ability to absorb the energy and also will be summoned from afar like Mjolnir.

This sword has a bad downside after it has been infected with the blood curse that indicates more blood can be spilt. Sometimes Dane has compensated the replacing the Ebony Blade with the other weapons containing the Sword of Light and Shield of Night.

Black Knight also can often be seen with the riding of the winged steed named Aragorn into the battle.

This time Sir Percy of Scandia is a real knight of Camelot who had battled with the Evil after the death of King Arthur. Now, the descendent of Sir Percy, Nathan Garrett has been inherited the sword Ebony Blade and also become the villain, fighting with the avengers before repenting and also passing the sword on to his nephew, Dane Whitman. There are also several other characters who have taken up the Black Knight mantle.

For some of the initial mistakes of the villain, Dane has managed to prove himself for the Avengers by infiltrating the Masters of Evil and also then protecting them during the conflict with Grandmaster. She becomes a valuable member of the Avengers and plays a key role in the seminal storyline Avengers: Under Siege. He even becomes a team leader, this is the time when he also become in love with Sersi who has taken a break from the Eternals to battle alongside withy the Avengers.

At the time with Avengers, Dane becomes the victim of the forces larger than himself He has discovered the Ebony Blade has a blood curse that has threatened to drive him insane. Often he has become unstuck with time and has been transported back to the 12th Century.

Sersi and he have been fought with his evil doppelganger Proctor and become stranded in the alternate universe that is popular as the Ultraverse.

As the mightiest hero of Earth, he has found courtly love with the Eternal avengers Sersi and also with the inhuman princess Crystal. It becomes a love triangle and that steamy triangle com s to an end while Dane just has no choice left but to form a lifelong psychic link named Gann Josin with Sersi for saving her life and sanity, it’s the commitment, the two has left the Avengers to protect the entire team from themselves and continue their battle for the justice.

Eternals has two extra sequences that are a mid-credits scene and also a post-credits scene. Latter these two have concerned Mr Whitman.