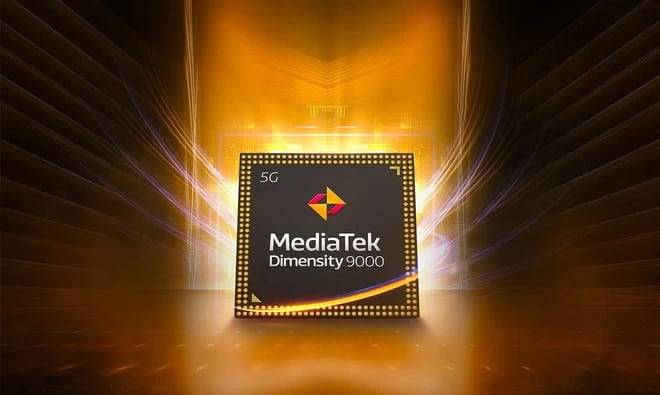 MediaTek has announced the Dimensity 9000, which is set to take on Qualcomm’s yet-to-be-revealed Snapdragon 8 Gen 1 platform in the race for the best top-end chipset for 2022.

The Hsinchu, Taiwan-based company said its new Dimensity 9000 chip will be the world’s first to use its manufacturing partner Taiwan Semiconductor Manufacturing Co’s “N4” chipmaking process, which helps makes chips smaller and faster. MediaTek said it will also be the first smartphone chip to feature a powerful new computing core from Arm called the Cortex X2.

The MediaTek Dimensity 9000 is the world’s first 4nm chipset, as well as the first to utilise ARM’s new v9 architecture. Not only that, but it’s the first chipset to feature ARM’s revolutionary core architectures. The new sub-6GHz 5G chipset is the world’s first smartphone processor to incorporate Bluetooth 5.3 and the first smartphone chip to use a Cortex-X2 core clocked at up to 3.05GHz.

There’s also MediaTek’s fifth-generation APU for AI processing, which has six total cores. The manufacturer claims that it has four times the performance and power efficiency of its prior version.

LPDDR5x memory with up to 7,500 Mbps bandwidth will be supported by the Dimensity 9000. It also includes 14MB of cache, which Mediatek claims boosts speed by 7% and reduces bandwidth usage by 25% when compared to an 8MB cache. The Dimensity 9000 outperformed the “Android flagship” in preliminary Geekbench results. It is also touted to be capable of handling panels with a refresh rate of up to 180Hz at FHD+ resolutions.

The Arm Mali-G710 GPU is in charge of graphics and games, and it offers a 20% performance gain over its predecessor. A FullHD+ display with a 180Hz refresh rate can be driven by the GPU. In addition, MediaTek is releasing a raytracing SDK that game developers may use to add new visual techniques to their Android games.

Coming to the photography department, the chipset supports the first 18-bit image signal processor, which offers the ability to capture 4K HDR video using up to three cameras at the same time, or still photos using up to a massive 320MP sensor.

As ever there’s 5G support – but only Sub-6GHz, not mmWave. However, the Dimensity 9000 is the first to realise a ‘Release 16’ 5G modem, which can take advantage of wider spectrum bandwidth, which could mean even speedier 5G connectivity. There’s also Wi-Fi 6E support, which builds upon the existing 802.11ax standard, making for even faster 6GHz support.