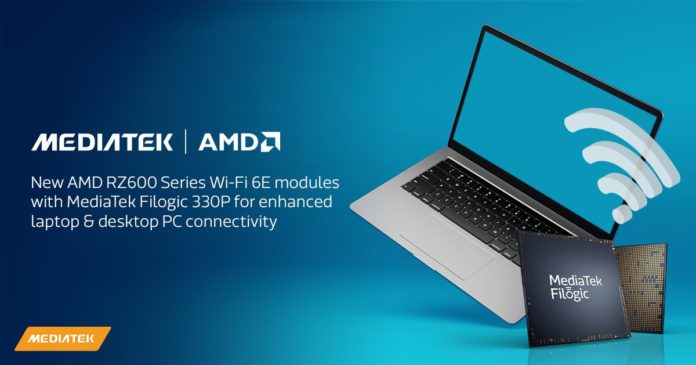 Finally, the rumour of AMD and MediaTek working together to bring their own WiFi 6 based network options seems true. The Taiwanese giant has already overtaken Qualcomm in terms of its mobile SoCs and is making its own name in the connectivity module business.

Gone are the days where Intel WiFi 6 has been deemed the best and only option for laptops, some affordable laptops didn’t have them at all. Well, my request to AMD previously was to improve its connectivity option and finally they did so in collaboration with MediaTek.

So, you can expect these new Wi-Fi 6E based connectivity modules to be shipped with Ryzen 6000 series processors and above in 2022. To optimize the AMD RZ600 Series Wi-Fi 6E modules with a focus on delivering seamless connectivity experiences for customers, AMD and MediaTek developed and certified PCIe® and USB interfaces for modern sleep states and power management, which are vital elements of modern customer experiences.

“MediaTek is already the Wi-Fi leader in a number of different segments, including smart TVs, routers and voice assistants. The new Filogic 330P chipset further broadens our connectivity portfolio as we continue to expand our footprint in the PC market,” Alan Hsu, corporate vice president and general manager, Intelligent Connectivity at MediaTek. “With this high throughput and ultra-low power chipset powering the next generation of AMD laptops, consumers can enjoy seamless connectivity and longer battery life while they game, stream and video chat.”

Filogic 330P supports the latest connectivity standards of 2×2 Wi-Fi 6 (2.4/5GHz) and 6E (6GHz band up to 7.125GHz), along with Bluetooth® 5.2 (BT/BLE). The high throughput chipset is ultra-fast with support for up to 2.4Gbps connectivity, including support for the new 6GHz spectrum at 160MHz channel bandwidth. The chipset also integrates MediaTek’s power amplifier (PA) and low noise amplifier (LNA) technology to help optimize power consumption and reduce design footprint which enables the Filogic 330P chipset to be embedded in laptops of all sizes.