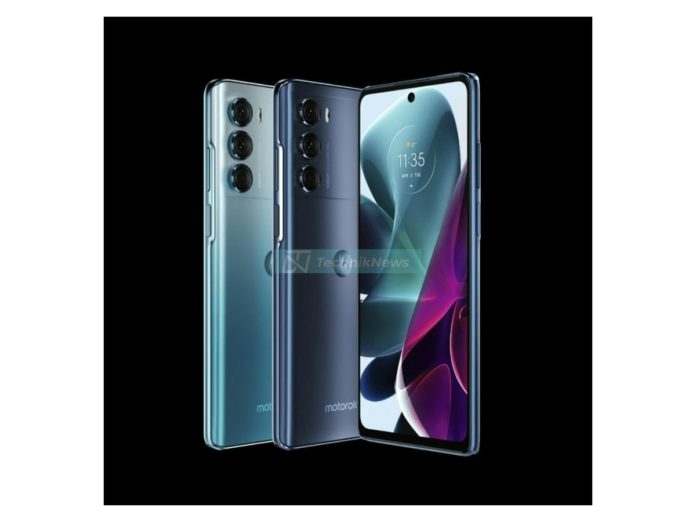 Motorola Moto G200’s alleged renders have appeared online, suggesting that the Moto G100 successor could come with a 108-megapixel triple camera setup and a hole-punch display. TechnikNews has shared renders of the G200, revealing its design and color variants. So let’s have a look at all the specifications, design and details of the phone.

According to the renders, Moto G200 will feature a centrally-positioned punch-hole design and a noticeable bezel on the bottom. It may have an in-display fingerprint scanner. The device will reportedly sport a 6.7-inch Full-HD+ (1080×2520 pixels) IPS LCD display with an aspect ratio of 21:9 and a 144Hz refresh rate.It will be available in two color variants.

The Moto G200 will bear a triple rear camera unit comprising a 108MP primary shooter, a 13MP secondary lens, and a 2MP tertiary sensor. On the front, there will be a 16MP selfie snapper.

The Moto G200 will be powered by a Snapdragon 888+ chipset, paired with 8GB of RAM and 128GB of storage. At the heart, it will run on Android 11 and pack a 5,000mAh battery with 33W fast-charging support. For connectivity, the handset should offer support for dual-band Wi-Fi, Bluetooth 5.2, GPS, 5G, a headphone jack, and a Type-C port. At present, the official pricing and availability information of Moto G200 is not known.

Released earlier this year, Moto G100 was launched with the Qualcomm Snapdragon 870 5G chipset, along with 8GB of RAM and 128GB of storage. Users can also expand the inbuilt storage via a microSD card (up to 1TB) on Moto G100. The device sports a 6.7-inch full-HD+ LCD display with a 90Hz refresh rate. Moto G100 is equipped with a quad-camera setup that features a 64-megapixel primary sensor. It comes with a 5,000mAh battery which supports the company’s proprietary TurboPower charging at 20W.