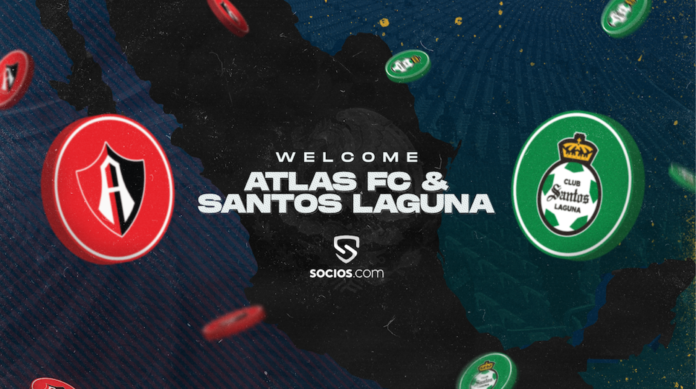 The $ATLAS and $SAN Fan Tokens will grant fans unprecedented access to their beloved clubs, including the chance to take part in key fan-related decisions by voting in polls on the Socios.com app.

Orlegi Sports, in partnership with Chiliz, the leading blockchain provider for
the sports and entertainment industry, has officially announced that they will be launching the official Fan Tokens of Atlas FC and Club Santos Laguna on the Socios.com all-in-one influence and rewards app for sports fans across the world.

This partnership will see Atlas and Santos Laguna become the first Mexican clubs to launch Fan Tokens on Socios.com, joining leading global organisations such as FC Barcelona, Manchester City, Paris Saint-Germain, Juventus, Arsenal, Inter Milan, Atlético Madrid, Galatasaray, AS Roma and the national teams of Argentina and Portugal, who already use Fan Tokens and the Socios.com app to engage with
their global fanbases.

$ATLAS and $SAN Fan Tokens will grant Zorros and Guerreros fans worldwide access to a wide range of new opportunities to actively connect with their teams, including the chance to take part in key fan-related decisions by voting in binding polls on the Socios.com app.

Apart from influencing decisions, Fan Token holders can also look forward to accessing exclusive discounts and promotions and opting to win unique prizes and rewards, from official products to VIP experiences. In addition, fans will be able to put their skills to the test against other users in games, competitions and quizzes, competing in global leaderboards and earning real-life and digital rewards, benefits and experiences along the way.

The launch date of the $ATLAS and $SAN Fan Tokens will be revealed soon, as well as the launch price, total supply, and other details.

This partnership with Orlegi Sports is an important milestone for Socios.com, since it’s a strategic gateway to Mexico, a key region where the company has very ambitious plans. According to a recent report by Nielsen, Mexico is the world’s seventh country in terms of number of football fans.

Driven by the central belief that transitioning passive fans into active fans is essential to the future of sport, Socios.com is a direct-to-consumer (D2C) platform that leverages blockchain technology to provide the world’s leading sporting organisations with the tools to engage with and monetize their global fanbases. The Socios.com app currently hosts a global digital community of over 1,3 million sports fans from 150 different countries.

More than 100 sporting organisations across the globe have partnered with Socios.com, including the aforementioned football giants, Formula One™ teams Aston Martin Cognizant and Alfa Romeo Racing ORLEN, MMA giants UFC and PFL and many others. Other Socios.com partners include LaLiga, AFA, several major esports organisations, 24 NBA franchises and the NFL’s New England Patriots.

Created by Chiliz, the leading blockchain provider for the global sports and entertainment industry, Socios.com has major expansion plans and is targeting many more Fan Token launches in LATAM and throughout the world. $CHZ – the digital currency for sports and entertainment that powers the Socios.com platform, and Fan Tokens for several partner clubs, is available on Brazil and South America’s biggest crypto exchange Mercado Bitcoin.

Alejandro Irarragorri, President of the Orlegi Sports Board of Directors, said: “We are very happy with this partnership and proud to be bringing to Mexico the app that the world’s leading clubs are using to connect with their fans and that is totally changing fan engagement in sports.”

“We are really excited about this partnership with Socios.com and Alexandre Dreyfus, with whom we share a clear vision to bring fans closer to their teams through technology. We can’t wait to start working with them to improve our fans’ experience and to keep pushing the sports industry forward.”

Alexandre Dreyfus, Founder and CEO of Socios.com, added: “We are very happy to have partnered with Orlegi Sports, a prestigious brand that provides an excellent gateway for Socios.com to enter the Mexican market through two clubs with great tradition and millions of fans.”

“With this partnership we add a new flag to the Socios.com partner map, which already counts 21 different countries in four different continents, and we confirm once again our global leadership in the blockchain space for the sports industry.”