“Unwelcome”: Warner Bros has dropped the trailer of the scary horror movie of deadly goblins 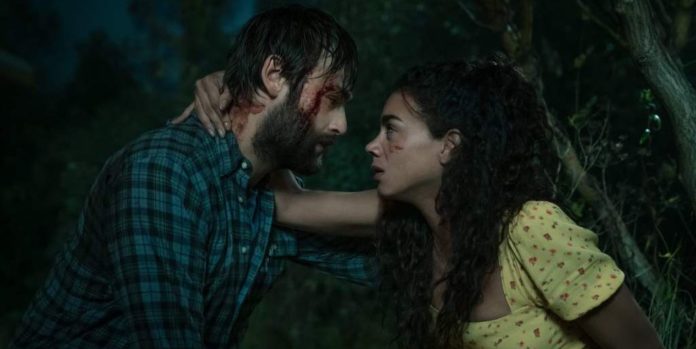 In this Halloween time, Warner Bros has dropped the trailer of the horror films. In the list of the horrors, the most spine-tingling horror that will join is the Irish film Unwelcome. The chilling trailer has just been dropped, and if you like horror shows, you should watch this one in the blooming–lit room in the corner.

Jon Wright jus has directed the film. The story is based on Irish and Scottish folklore contains with goblins. This time the goblins are not cute as we have seen in the animated movies; in this film, we will see the terrible murderous goblins who are netting for making life as possible for the coupe Maya and Jamie.

The plot of this horror film mainly revolves around the screenplay by mark Stay, which has followed the couple Maya and Jamie. They are just idealistically swapping their city life due to the tranquillity of the Irish countryside, but we can say that it’s very safe as their search for peace does not go as planned.

They have come to the new surroundings, and after coming to the unique atmosphere here, they feel unwelcome. They have found that the wood at the bottom of their garden is home to the aforementioned deadly goblins.

In this film, we will see the goblins with Redcaps, and there is a piece of Anglo-Scottish folklore that the director Jon Wright wove into the sequel with his Irish heritage and has been interested in the mystical creatures. On speaking about Empire, Wright says: “My grandfather, who was an Irish farmer, believed in fairies.”

He also said that his grandfather used to say that he had been tried to build a wall at the foot of his garden, but every morning when he got up, it had been knocked down. He was believed that it was for building the fairyland, so he could not have t there.

The director also has a book of fairy tales, Grimm fairy tales, in his grandfather’s house, that he hallway s used to read and while he went to stay. He had always been fascinated by myths and legends and the primal way to tap into the nature of humans.

This film will feature John-Kamen as Maya, who is fighting with goblins when heavily pregnant in this movie; she also appeared in the Game of Thrones and played a pivotal role in Netflix’s The Stranger. Douglas Booth will feature the part of Jamie, who had starred in the BBC’s adaptation of Great Expectations and played the role of Boy George in the BBC Two film Worried About The Boy.

WarnerBros UK has also tweeted about the horror film

It has also featured Jamie Lee O’Donnell from Derry Girls, who will also stay in the latest Channel 4 prison drama Screw Colm Meaney from the Snapper and The Young Offenders’ Chris Waley, also featuring in this horror film.

This film will hit Cinemas in February 2022.

Here is the trailer :

“Dune”: The final trailer of Warner Bros this sci-fi film has been dropped

“Dune”: Warner Bros has dropped the trailer of this sci-fi film