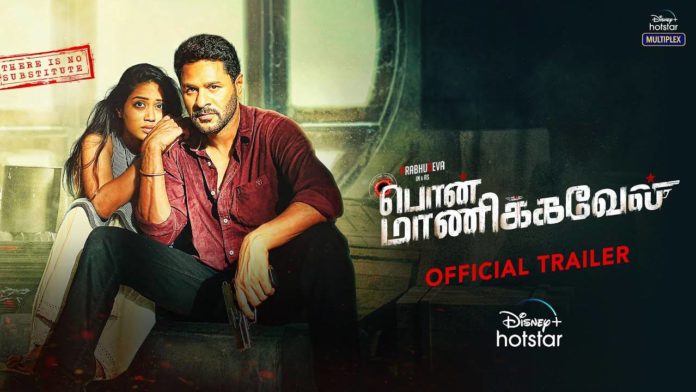 The dancing star Prabhu Deva is coming with his new film, after Street Dancers 3D. We have mostly seen him do dancing films, but this time we will see him in such a different role. The makers of the latest film of Prabhu Deva Pon Manickavel has revealed the latest trailer on Wednesday, 11th November.

The entire also takes Twitter and drops the new poster that is featuring actor Prabhu Deva as a police officer for the first time in his career. After watching the video it has been confirmed that Prabhu Deva will play the pivotal role as Pon Manickavel that is someone who always rules.

The costars of Pon Manickavel Nivetha Pethuraj, the late director J Mahendran and Suresh Menon, among the others in such important roles. It has been helmed by AC Mugil Chellappan, the movie has been set for stream on OTT platform Disney Plus Hotstar.

After sharing the news with the fans on Twitter, Sony Music South has shared the latest poster from the movie and wrote: “ the trailer of the action-packed#PonManickabel arriving TODAY! Stay tuned.”

This new film has backed by Nemichand Jhabak and also Hitesh Jhabak. The composer D Imman, who has scored the music for Rajinikanth’s Annatthe currently, and has been roped as the music composer. We will like to inform you that the entire technical team also contains Shivanandeewaram as the editor and KG Venkatesh as the cinematographer.

This film will stream on Disney + Hotstar on 19th November 2021.

- Advertisement -
Powered by JustWatch
Share
Facebook
Twitter
Pinterest
WhatsApp
Linkedin
Previous articleTop 5 underrated free agents in football to look out for in June 2022
Next articleICC T20 World Cup 2021: All you need to know about highest scorers, highest wicket takers, batsman with most sixes and fastest ball