FIFA 22: How to do the 88-rated Daniel Parejo Rulebreakers SBC card and is it worth doing? 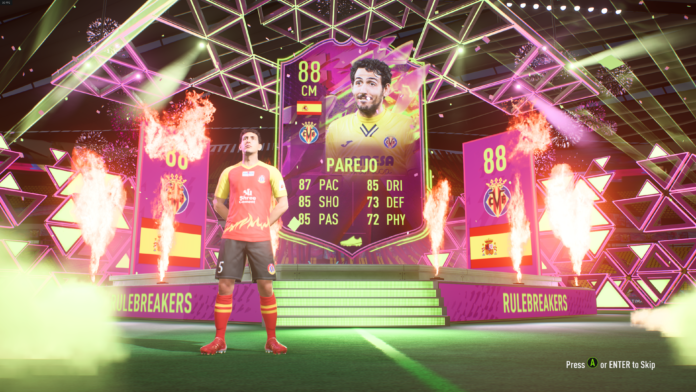 The Rulebreakers promo is now running on FIFA 22. Currently, Team 2 is live. EA Sports have released Daniel Parejo SBC for the Rulebreakers Team 2. The 88-rated Rulebreakers SBC needs two squads. Let’s take a look at them.

Is the 88-rated Daniel Parejo card worth doing?

The 88-rated Daniel Parejo Rulebreakers SBC is one of the best priced SBCs to date in FIFA 22. It comes at a very low price of 100k FIFA coins, if you build the team from scratch, though in most cases you’ll have enough fodders for the 83-rated squad. The card has got some good stats. Let’s take a look at them.

The 88-rated Daniel Parejo Rulebreakers SBC card has a medium work rate for both attacking and defending. It has a 3* skill move which can be a let-off for some, however, the 4* weak foot can make up for it.

The Rulebreakers card has good attacking stats with 87 pace, 85 shooting, 85 pass and 85 dribbling. The only downside is the defending and physical stats, though both of them are 70+. You can easily play the 88-rated Daniel Parejo Rulebreakers SBC card in CAM instead of its base position of CM.

I have a La Liga and Bundesliga mixed team, so the Daniel Parejo card fits perfectly into my team. Parejo along with Fekir manages the attacking side of the play whereas Goretzka oversees the defensive part.

If you have enough fodder or have 100k FIFA coins, then this SBC is a must do. The player is good in game and he can give great long pass as well as shoot from long distances.