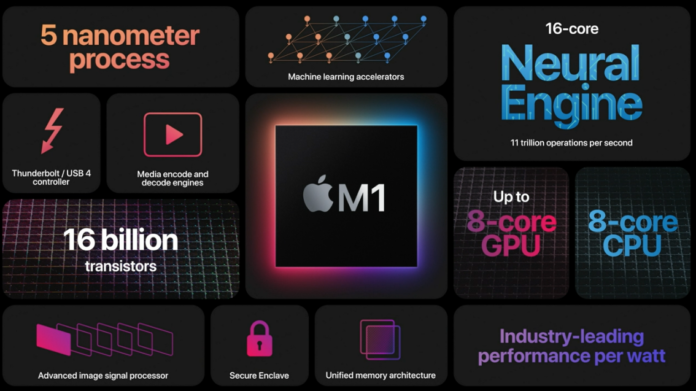 Apple has been moving aggressively towards its adoption of the Mac system-on-chips (SoCs) development plan and the company now has three 3nm chips — codenamed Ibiza, Lobos, and Palma. All these chips are scheduled to arrive in 2023 and will offer up to 40 general-purpose CPU cores.

With the launch of its M1-Series SoCs, Apple has made a name for itself in the CPU market and the company has built up quite a fathomable reputation among the CPU makers. The Cupertino tech giant has built quite a formidable family of highly-integrated processors that can compete against the vast majority of the best CPUs from AMD and Intel.

Apple has beat all most mid-range processors in the market and the only processors that are untouchable for Apple’s M1 Max are high-end desktop/workstation offerings like AMD’s Ryzen Threadripper and Intel’s Xeon W.

However, according to sources, the Cupertino tech giant has a hard-hitting SoC roadmap that includes a 40-core CPU due to be released in about two years from now.

Apple is scheduled to introduce its 2nd generation M-series SoCs for Mac computers, and these processors will be made using an enhanced version of TSMC’s N5 node. These chips are featured to offer significant improvements as far as performance and transistor count are concerned.

But what we are looking forward to is Apple’s 3rd generation M-series SoCs as they will be made using TSMC’s N3 fabrication process. This new technology will enable the Cupertino tech giant to significantly pack more transistors and increase clocks without increasing power consumption.

2023 will be a huge battleground between Apple, AMD, and Intel for dominance over high-end desktop CPU market share.