Action Hero: Ayushmann Khurrana has made an announcement, teaser released 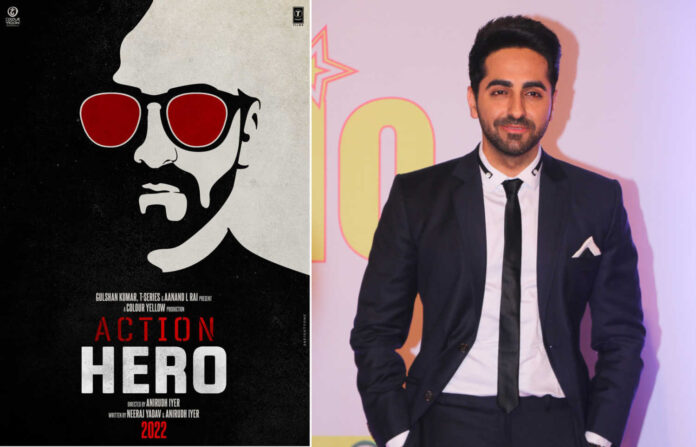 On Saturday, Ayushmann Khurrana has made an announcement that he will be featured in an upcoming film named Action Hero. This film is being directed by Anirudh Iyer and is co-written by Neeraj Yadav. The teaser of the film was also released. This film is going to be the third collaboration with filmmaker Aanand L Rai. The Bollywood actor Ayushmann Khurrana has taken it to Instagram and made the announcement.

Ayushmann Khurrana has shared an animated teaser of the upcoming film named Action Hero that gave us a short glimpse of what we can expect from the film. In this film, we are going to see Ayushmaan Khurrana in an action star role, who has to indulge in real-life action to save the day.

The official press of the film has quoted and said that the film Action Hero not only features the artiste’s journey in front of the lens but also at the behind of the lens. This is going to boast of “slick action and offbeat satire”. The Bollywood actor, Ayushmaan Khurrana has previously worked with the director Aanand L Rai in various projects like Shubh Mangal Saavdhaan and Shubh Mangal Zyada Saavdhaan, both were appreciated by the audience. The film Action Hero is co-produced by T-Series.

Further, in a statement, Ayushmaan Khurrana has said that the script of the film Action Hero is going to be a “destructive” one and it also included all the stereotypes that he has come to be associated with as an actor.

“I’m thrilled to be collaborating with Aanand sir for the third time and I hope our track record to entertain audiences worldwide with disruptive scripts continues with Action Hero. I’m also very excited to work with Bhushan Ji again. Colour Yellow and T-Series are like a second home to me.”

Ayushmaan Khurrana has further said, “I absolutely loved the script of Action Hero instantly. It’s zany, it’s fresh, it’s disruptive and it has all the trappings of cinema that I have come across to be known for”.

The film Action Hero is going to be shot in India and the UK and is aiming to be released in 2022. Ayushmann Khurrana’s upcoming films include Doctor G and Chandigarh Kare Aashiqui.

Read:- Puneeth Rajkumar has received a State funeral: All other celebrities have also attended

- Advertisement -
Powered by JustWatch
Share
Facebook
Twitter
Pinterest
WhatsApp
Linkedin
Previous articleFIFA 22: How to do the 88-rated Daniel Parejo Rulebreakers SBC card and is it worth doing?
Next articleRobert Downey started crying after hearing Iron Man’s death in the Avengers Endgame